If you’ve recently taken up riding or are looking for a new way into the city to avoid public transport and leave the car at home – we’ve listed the best bike riding avenues into the city from all angles.

Of course, these are not the only paths into the city! If you have your favourite, feel free to share it with us.

If you want to discover your own route, check out this handy guide: How to plan a bike route.

There are many great bike riding corridors you can follow from the northern suburbs into the city, mainly following the rivers and creeks that flow down towards the bay.

The Maribyrnong River Trail is a 23 kilometre trail that starts in Brimbank Park, Keilor East and runs down to Footscray, but you can keep on riding straight into the city.

The trail features stunning views of the city and some beautiful riverside riding for all skill levels.

The Merri Creek Trail is another popular riding route that runs from Coburg North to Dight Falls in Clifton Hill, where the creek meets the Yarra.

Winding alongside the creek the trail passes Coburg Lake Reserve and the Brunswick Velodrome along the way. 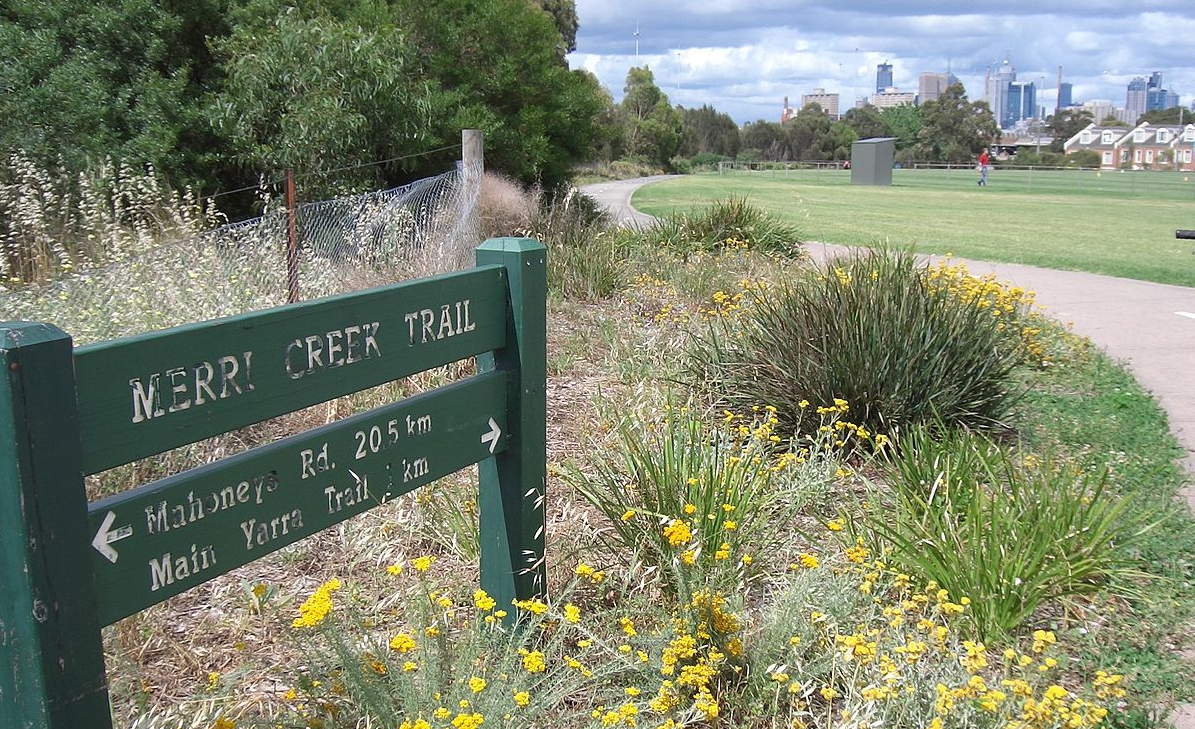 Just a couple of suburb over, the Darebin Creek Trail is another leafy creek-side trail that you can access from way up in Epping and follow for almost 30 kilometres to Kew where it meets up with the Yarra River.

The creek-side trail also intersects with Hendersons Creek Trail at Childs Road as well as the South Morang Rail Trail.

Like many of the trails heading into the city, once it hits the Yarra you can easily jump on the Capital City Trail and head straight into the CBD.

Not another creek-side trail, ‘the old pipeline’ route runs from Thomastown Station to Rushall Station, following the underground route of the main pipe supplying water to the city. The route also includes the popular 7 kilometre stretch of path down the centre medium of St Georges Road through Preston and Brunswick, also known as the St Georges Road path.

This route is a more urban alternative to the other creek trails, and includes many northern suburb tram and train stops along the way. 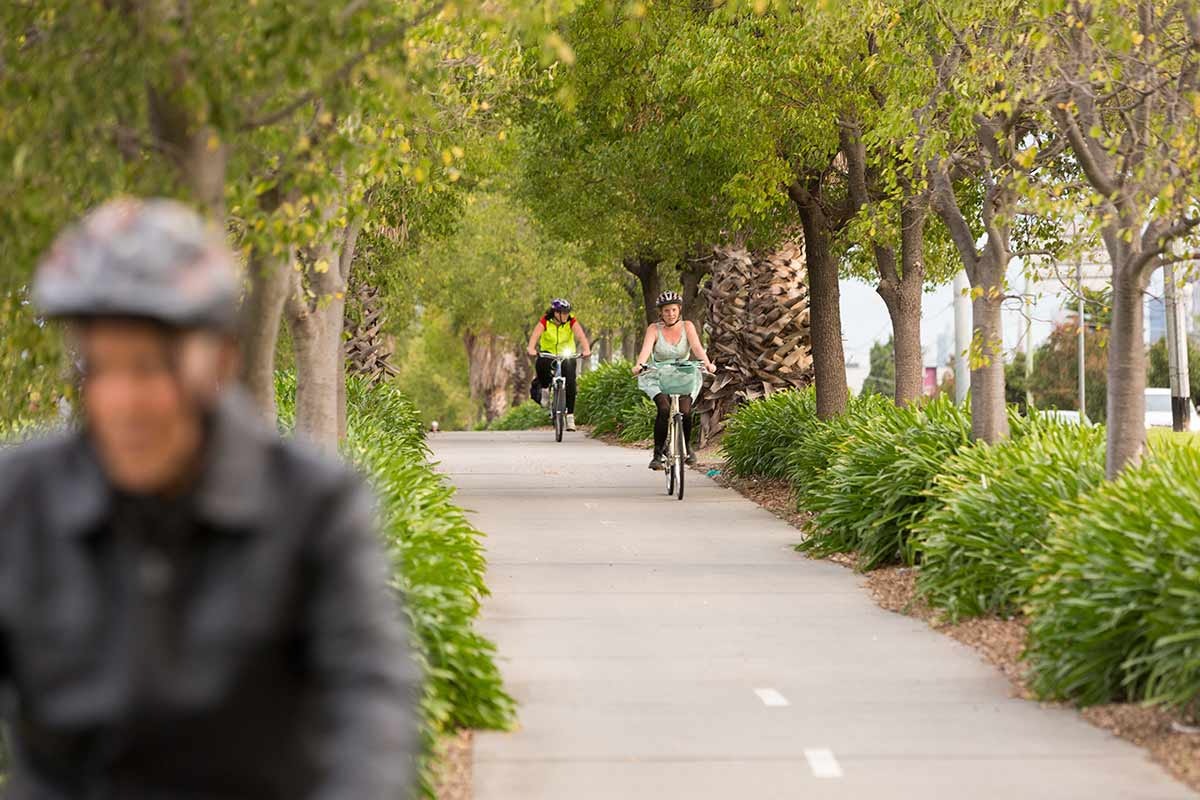 For residents of the south, there is one key bike riding avenue heading toward the city, and it happens to be one of the most iconic bike riding routes in Melbourne. 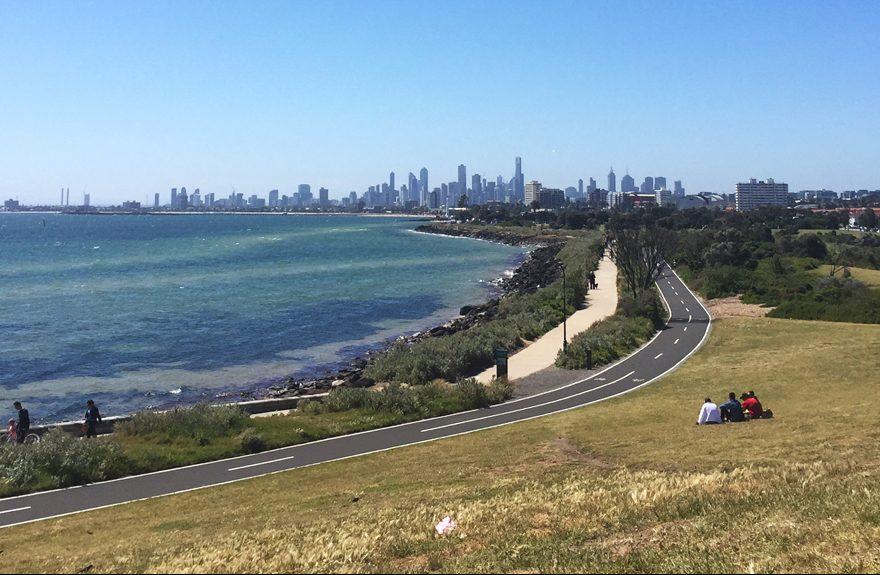 Winding it’s way along the coastline, the Bay Trail is a popular route for people riding bikes to work and for people taking a leisurely bike ride on the weekend.

For the most part, the trail is off road. However, there are a few gaps in the trail where bike riders must leave the path and negotiate local and sometimes main roads before reconnecting to the path.

Bicycle Network has long been campaigning to fully connect the Bay Trail so that riders can travel off-road from the Mornington Peninsula into Port Melbourne.

For those who don’t want to hug the bay, the Djerring Trail, or Caulfield–Dandenong Rail Trail is a 41.7 kilometre path that follows the train line through the south-east.

Over the past few years, the Level Crossing Removal Project have removed nine dangerous and congested level crossings between Caulfield and Dandenong by elevating the rail line in three sections, and completed 17 kilometres of lush open space for walking and cycling between Monash University’s Caulfield Campus and the East Link Trail.

There are a number of popualar routes running east into the city that can be easily accessed from most of the inner-eastern suburbs.

The Koonung Creek Trail follows part of the Koonung Creek and travels alongside the Eastern Freeway for around 18 kilometres from Blackburn to Kew where it meets up with the Yarra River.

Like many of the trails heading into the city, once it hits the Yarra you can easily jump on the Capital City Trail and head straight into the CBD. 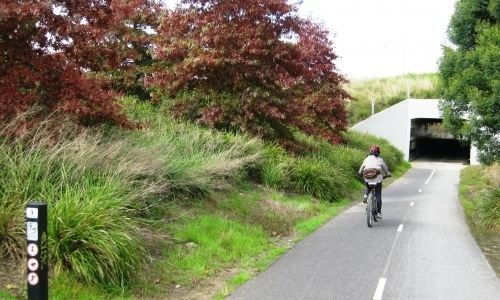 The Main Yarra Trail winds its way along the Yarra River for over 40 kilometers from Templestowe in Melbourne’s north east into the Docklands precinct. 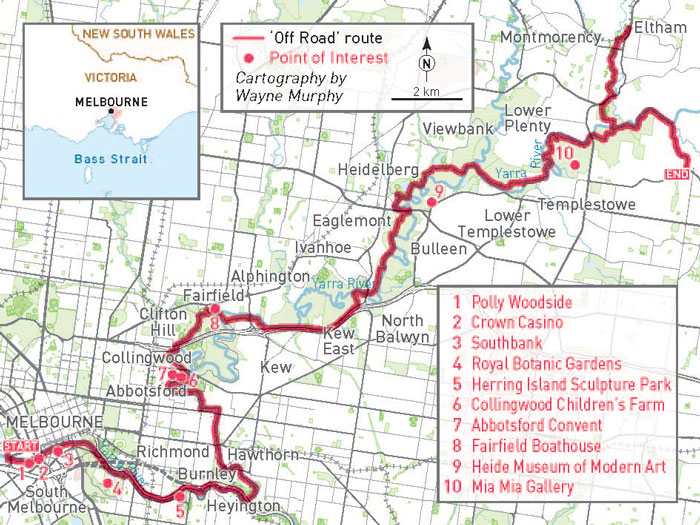 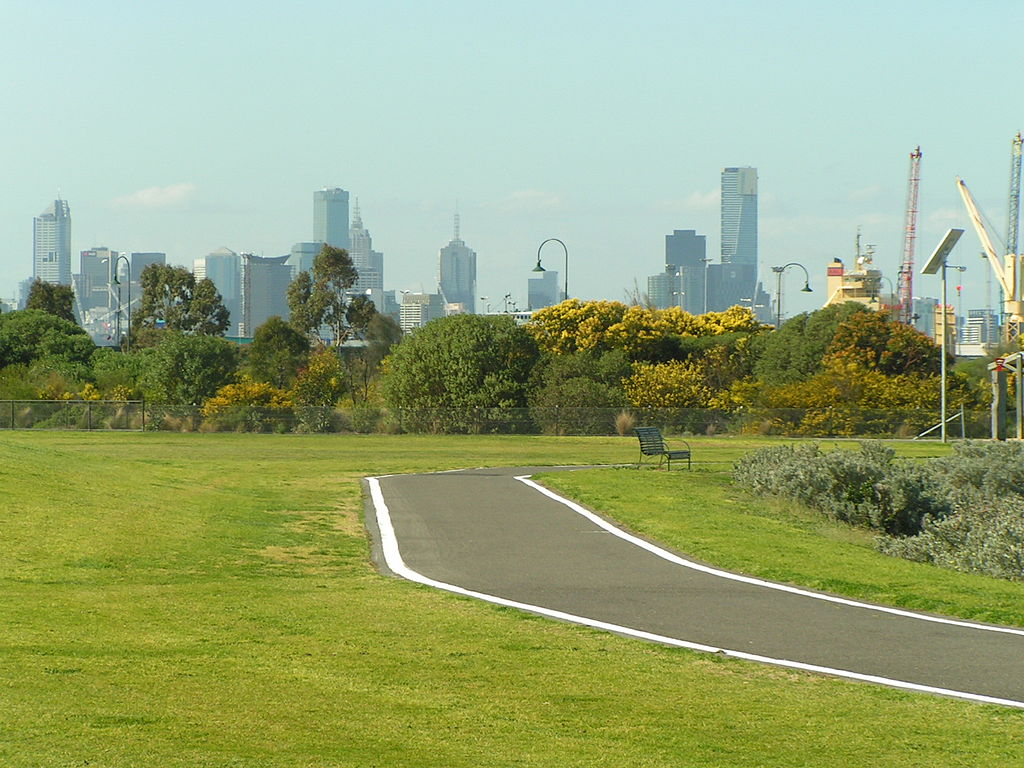 Similar to residents of the south, the main trail into the city from the western suburbs hugs the shoreline of Port Phillip Bay.

Running along the coat from Altona, the Bay Trail West, like many of Melbourne’s trails, intersects with other trails and often changes names along the way – morphing with the Skeleton Creek Trail near Sanctury Lakes, the Foreshore Trail between Altona and Williamstown Beach and the Hobson Bay Coastal Trail around Williamstown.

The pretty route rides through parks, wetlands, beaches, and offers great views of the city and the bay.

The inland option from the west is the Federation Trail – a 23 kilometre shared path that follows the Main Outfall Sewer line from Werribee to the West Gate Bridge.

Not as pretty but quite convenient, the ride goes straight through the industrial west and intersects with the Kororoit Creek Trail heading south from Sunshine.