Why is bike riding awesome?

Why is bike riding awesome? Bicycle Network CEO Craig Richards has 10 answers to the question that will help turn anyone into a bike believer.

These are the things that Craig remembers when he has to convince someone that bikes are great, whether it’s a shock jock on the radio, a relative at a barbecue or someone who doesn’t know much about bikes. You can use these 10 answers whenever you need them. Freddy Mercury perfectly summed up the freedom of riding a bike.

I’ve got to say, and this might be viewed as high treason, but I never use to like the Queen Bicycle Song.

It used to annoy me a bit when everyone played it as an intro whenever I was about to speak about bikes.

As for Queen songs I preferred Somebody to Love and Another One Bites the Dust.

But I couldn’t possibly leave it out of the top 10 and then when I really looked at the lyrics, well, I’m converted. I’m now on board.

I want to ride it where I like – it just sums up what’s great about bike riding – freedom, freedom of individual choice.

So thanks Freddie, thanks for recording at album in France, thanks for being inspired as the tour went past and thanks for answering the question
why is bike riding awesome.

I remember the first year I was married and we bought each other Malvern Stars so we could ride around the nearby Westerfolds Park.

I remember going and test riding my Giant at St Kilda Cycles – my 50th birthday present!

When someone’s getting cranky about cyclists, if you can get them talking about the day they got their first bike, it’s a great way for them to remember just how amazing bikes are. Do you remember getting your first bike? There's not better feeling. 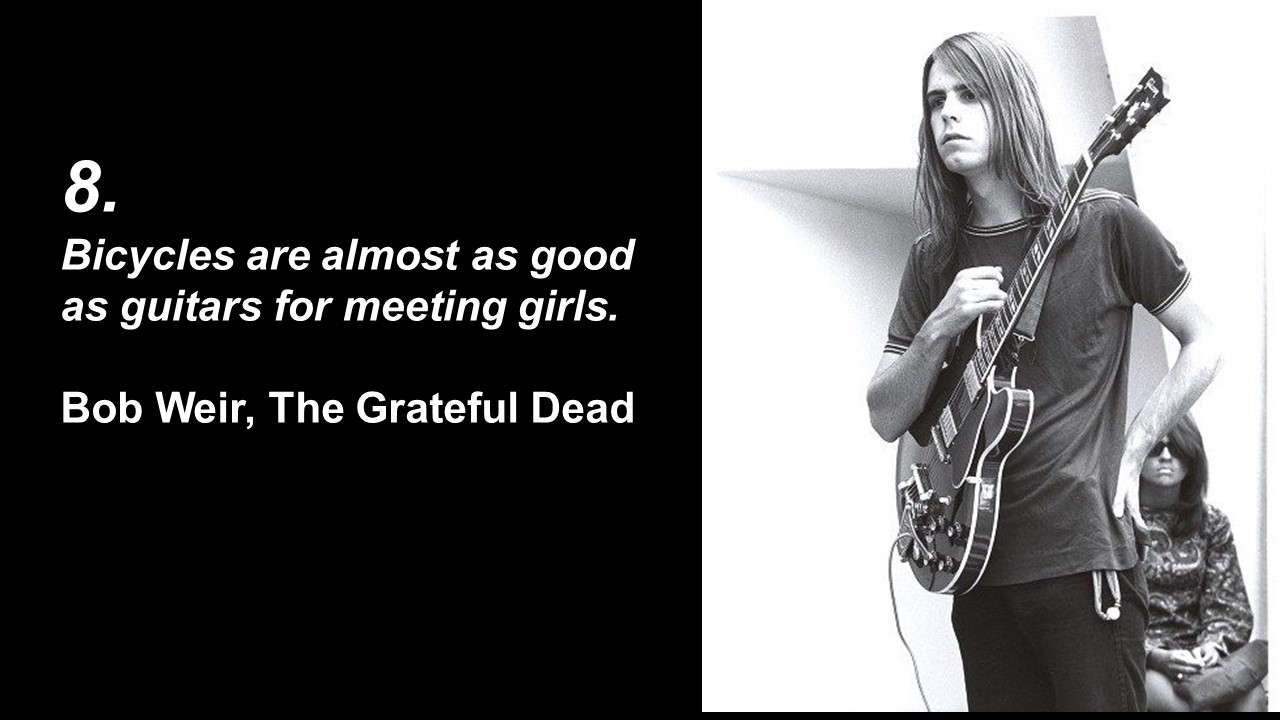 Bob Weir reckons bikes are as good as guitars.

I don’t know a lot about the Grateful Dead, bit before my time.

But this guy Bob Weir is a music legend and this quote makes the top 10 because it’s edgy and a good one.

Well who can argue with a Beatle who became a symbol for peace?

There’s lots of great photos of John Lennon on a bike. John Lennon spoke about how his childhood dream was to own a bike and how happy he was when that dream came true.

If only his other dreams about the world had come true?

Nevertheless, Lennon’s quote about sleeping with his bike shows just what a precious item the bike is and how much it means to so many people.

Let’s just hope one day, the world will ride as one. Bob Weir thought bikes were almost as good as guitars, but to John Lennon they're more precious than his Epiphone Casino. Many songwriters have lamented about love – perhaps they should have just gone for a bike ride.

This one comes from a study about how the societies we’ve developed with workplaces a long way from our homes come at a cost to our happiness.

Of course, with the COVID-19 crisis, the commute for many has suddenly become the few steps from the bed to the dining table, which presents a whole other set of problems.

Anyway, we all know how wonderful falling in love is, so for riding your bike to work to be make you just as happy, now that’s a top 10 argument to keep close to your heart.

Herbert George ‘HG’ Wells was writing science fiction about time travel and wars with aliens back in the late 19th century.

At the same time, bike riding was booming.

Well here’s HG Wells with his wife on a bicycle. His quotes about bikes showed his vision, one was that cycle tracks will abound in utopia

But this one about not despairing for the future of the human race, like stories about time travel and alien invasions, stills holds true over 100 years later. Bike riding is the closest we’ve come to hovering off the ground whenever we want.

This one isn’t a quote, it hasn’t come from a study. It’s just an observation about why bike riding is magic.

It’s just the freedom of feeling that you’re not weighed down by gravity.

We’re land based creatures, which is why floating in the sea also feels liberating. But bike riding is the closest we’ve come to hovering off the ground whenever we want.

A great way to answer the question about why bike riding is awesome.

I can just see JFK up to his eyeballs in it – the Cuban missile crisis, the bigots in the south, the space race, and then there was Marilyn.

All pretty stressful. No wonder he needed to slip away to Nantucket or Martha’s Vineyard for a relaxing pedal to get away from it all.

Thanks to JFK we have a brilliant way to sum up why bike riding is great. JFK knew the stress relief of riding a bike. Give bike riding a go – you'll get hooked.

No wonder it’s number two on the list, this one has comedy and meaning.

And to have a Nobel Prize winner who stood up for civil rights and to end the
Aparthied as a bike supporter, well it doesn’t get much better.

Who cares if the ‘teach a man to fish’ quote didn’t come straight from the bible as many think, this adaptation is a ripper.

Oh, sorry to anyone who really loves fishing.

No shock that this famous quote makes number one in the top 10!

There’s no better place to take time out from distractions and think than on your bike. You may never come up with e=mc2 while riding, and like me you may never even understand what it means.

But it’s hard to argue with the thoughts of a genius, which is why this Einstein quote is our number 1 answer to the question of why bike riding is awesome. You don't have to be an Einstein to ride a bike, although you could be.

Why do you think bike riding is awesome? Head to our social media pages and let us know!