Taking control of the commute

“I’d see cyclists riding by and I knew that could be me.”

This was the realisation that stopped Travis Shields waiting for buses and started him taking control of the commute and riding an ebike instead.

“I was pretty frustrated by public transport,” says Travis. “It was mainly the connections. The train system I found quite good but if you missed connections to buses you had to wait for the next one.”

Travis knew what cycling had to offer from previous commuting on a non-electric bike.

“I just found it hard to do the four to five days a week riding,” he explains of his 11km one-way commute.

The answer was an ebike.

With assistance from an electric motor, the speed and comfort of your commute are in your control.

“I can guarantee travel times,” Travis explains. “It’s around 40 minutes – depending on which route I take.” Taking control of the commute extends to what clothes to wear. An ebike reduces the need to dress for the ride, leaving you free to dress for your destination.

While he found he still had to change into shorts for riding in summer, Travis finds the ebike highly adaptable to his needs.

“The reason I’d use the assistance more is because I wouldn’t want to be sweating too much in my work clothes. I use it less when I’m treating it more like a normal bike – though I’ll still take the assistance on the hills,” he laughs.

Guarentee the power you need

“You don’t have to worry about recharging or replacing batteries in lights – you’ve just got one big battery and all the wiring is built into the frame. I found that very handy to be able to switch on and off both sets of lights at the press of a button.” He says.

Even making the most of the battery though, Travis has never been left without the power he needs.

“I’ve ridden to work and back twice and still had a little bit of life left in the battery. I tend to charge it every night. I take the battery off – it’s similar to what you do for a phone,” he explains.

The result is a very convenient vehicle that turns out to be useful for all sorts of journeys.

“I do find myself nipping down the shops a little bit with the panniers – we’re only a one-car family,” says Travis. 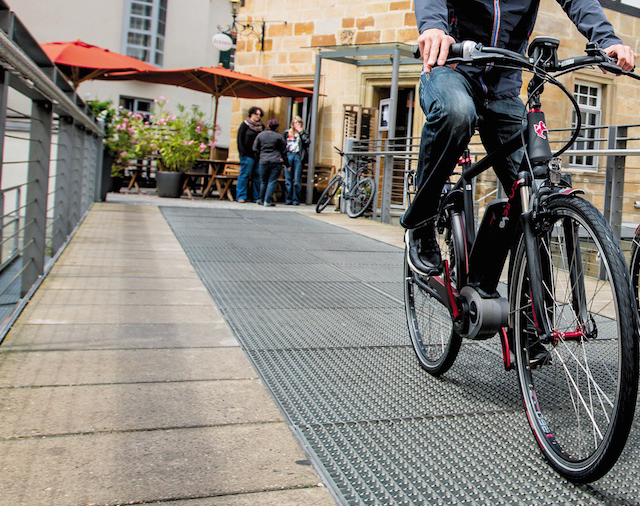 As an IT professional, Travis carefully considered the electrical system he went with.

“I went for the Bosch system because the research I did showed that it was a reliable, robust system. I thought I’d pay that little bit extra and get that better-known entity and system.

“When I did my maths, the $8 a day on public transport three times a week I turned out that in a few years it would pay for itself. That’s how I did my ‘business case’ to upgrade to an ebike instead of getting another ordinary bike.”

“I was due for another bike and if I gotten a conventional one I’d probably only be using it a couple of days a week and using public transport those other days. Whereas with this I avoid public transport all the time and that justifies that extra spend on a slightly more expensive bike.”

His experience makes Travis an advocate of ebikes for riding to work. “If you’re currently riding it’s an easy step to upgrade to an ebike,” he says. “If you’re not currently cycling I think an ebike is an easier way to get into actively commuting to work.”