It’s a long-standing belief among many transport planners, engineers, drivers and even bike riders that wide traffic lanes mean safe and congestion-free traffic flow. But bigger isn’t always better when it comes to making our city streets safer for everyone. 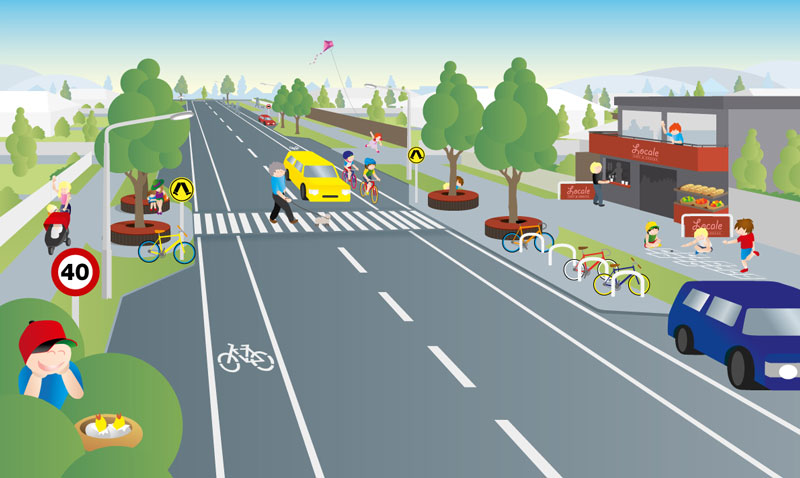 The Mornington Safer Speeds project (beginning in March 2012), supported by funding from the Victorian Traffic Accident Commission and VicRoads, included speed-reduction trials being established in the area.

It’s intuitive to think that wider traffic lanes give cars extra space, putting them further away from the things and people they may hit.

However, it’s important to recognise that whether we’re driving, riding or walking, human behaviour is impacted by the nature of the street environment around us.

When we perceive that we have more room to drive, we’re provided with a false sense of security. In fact, we are more likely to drive faster, increasing the risk of having a crash.

Specifically, studies into road widths found that in urban environments, wider lanes (those over 3.3 metres wide) can be detrimental to safety. Specifically, wider lanes (3.3 – 3.4 metres) are associated with a 33% higher impact speed and crash rates. In built up environments, reducing the width of traffic lines and slowing speeds impacts the behaviour of road users by acting as a type of psychological control. It sends a message for drivers to be careful.

On a narrow road, drivers are forced to pay attention and slow down because there’s less margin for error.

It’s a positive design approach that also encourages engagement and eye contact between road users, making the street a more attractive and low risk place to ride or walk.

When we look at the average widths of some of the world’s most bike friendly cities, there’s a clear trend.

Both Amsterdam and Copenhagen have average lane widths from 2.8 metres to 3.25 metres and some of the highest rates of cycling participation in the world.

In Melbourne, traffic lane widths are being routinely trimmed. There are even cases where, as a speed reduction measure, roads have been narrowed by the introduction of bike lanes.

It is interesting to note that the City of Yarra was a pioneer in narrower streets and has reduced many streets to 2.8m lanes, and bike traffic and safety lifted considerably as a consequence.

If the last few decades have shown us anything, it’s that you can’t build your way out of congestion – that is unless you’re building separated bike lanes which make easier for more people to ride.

That’s because by creating more road space for motor vehicles, you generate more traffic and eliminate any congestion-busting benefit.

Interestingly, when we narrow a road from 3.7 metres to 3 metres, research shows that there’s no measurable decrease in urban street capacity. In fact, 3 metre-wide lanes carry the highest traffic volumes – 18% higher compared to a 3.5 metre lane.

The Bay Trail in Kingston is being extended to complete a missing link between Mentone and Mordialloc, creating an off-road network linking all of Sanctuary Lakes, Craigieburn, Ringwood and Mt Eliza.

To do this, the width of Beach Road will be reduced in some sections by 30 to 60 centimetres, which will be in uniform with other parts of the road. A reduced width on parts of Beach Road will not impact safety and will help deliver more off-road options for bike riders.