The Spirit of Tasmania has announced it will be sailing to Geelong instead of Melbourne from late October, but what does this mean if you are crossing with your bicycle?

The previous port in Melbourne was an easy riding distance to many places and was not far from train stations to take you straight out of the city.

The move to Geelong means it will not be so easy to roll off the ferry and head to where you are going, unless it’s somewhere in the west.

Many people will have to get to and from the Geelong terminal by train using the regional V/Line services.

The closest useful station to the terminal is North Geelong. North Shore station is also nearby and accessible by paths but not every train stops there.

Annoyingly, V/Line does not allow you to book a bike when you book your passenger ticket.

Each train has a certain amount of space set aside for bicycles but it’s on a first-come, first-served basis and the conductor can decide whether to let bikes on or not. Also, the space for bicycles can get taken up by luggage.

On top of these restrictions, V/Line advises not to travel in peak periods and says the Geelong trains are ones which have limited availability for bicycles, especially the VLocity services.

This is a real problem for people who want to travel with bicycles as people getting off the ferry at Geelong will be right at the start of peak hour services and people coming from Melbourne will have to arrive in Geelong 2 hours before departure to avoid peak hour. The Spirit docks in Geelong at 6 am and disembarks from 6.30 am. By the time you get off and get to a station the peak hour period of trains arriving in Melbourne between 7–9.30 am will have already started.

If you can get off the Spirit quickly there is a 7am ferry from Geelong to the Docklands area which arrives just after 8.30 am for $19 and no extra cost for bicycles. Unlike V/Line you can book a spot for your bicycle but you must buy your tickets at least 60 minutes before departure. If you miss it, the next ferry is not until 11.25 am and takes 2 hours and 15 minutes.

If you are coming from Melbourne to catch the Spirit from Geelong, the last train before peak hour starts is the 3.50 pm from Southern Cross Station. This gets you in to North Geelong at 4.46 pm and the boat leaves at 6.45 pm. Unfortunately, the scheduled ferry from Melbourne arrives too late to meet the Spirit. 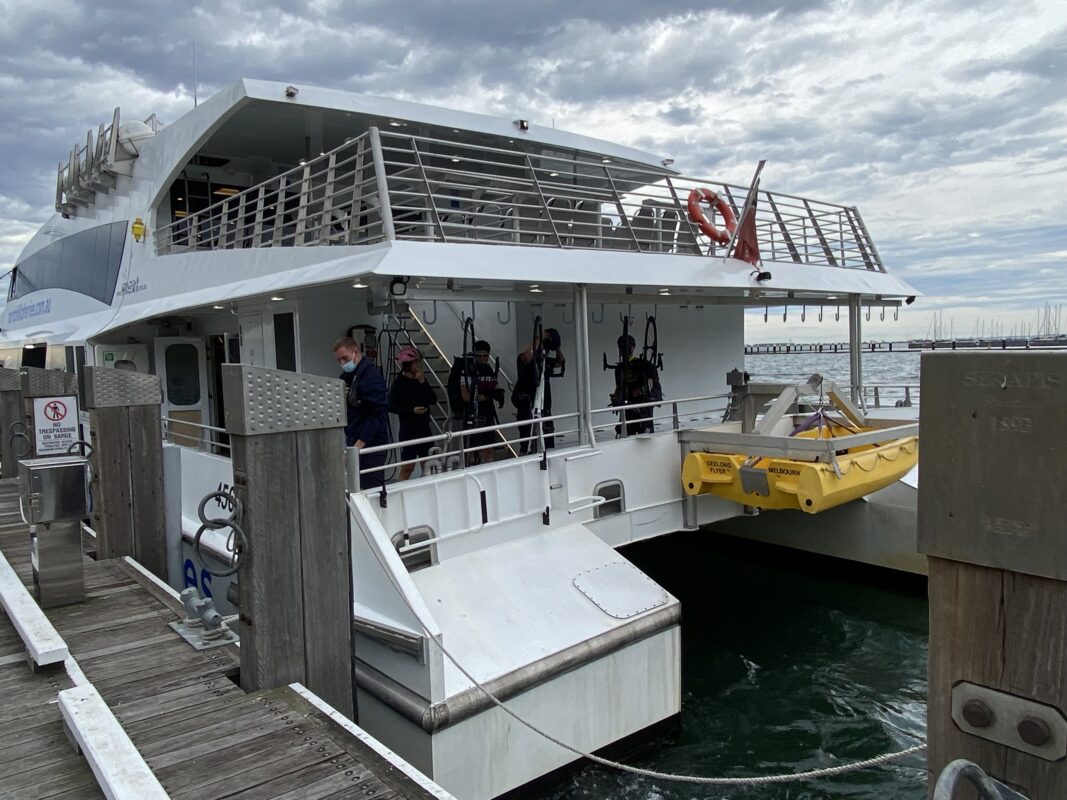 Bicycle riders have been trying for years to get V/Line to make it easier to take bicycles on board or at the very least allow people to book a space for their bicycles when they book their tickets.

Some of the tips in online forums and blogs include searching out a platform attendant as soon as you get to the station to let them know you have a bicycle you want to get on the train. They can tell you where to stand to get to the carriages with bicycle storage and can help talk to the conductor.

For many people wanting to head to Tasmania with their bicycle and all their gear, catching the Spirit has been a cheaper option than flying. For Tasmanians wanting to travel interstate with bikes and especially e-bikes, it’s also been cheaper and easier than having to mail batteries or buy them new interstate.

Allowing passengers to book a bike on a service that meets the Spirit would be the easiest way to help people take their bikes back and forth across Bass Strait.

If you would like it to be easier to catch the Spirit and a V/Line train with your bicycle, please consider writing to the responsible government ministers in Tasmania and Victoria.