Don't have time? You can view all bike funding and policy commitments using our handy infographic here.

We know this federal election is going to be close, with several seats depending on just a few hundred votes to determine which party will govern us for the next three years. At Bicycle Network, we’re working hard to ensure whichever party is elected, they are hearing the voices of people that ride bikes and are ready to invest in active transport.

In late 2021, we got in touch with the relevant portfolio holders in The Liberal National Party, Australian Labor Party & Australian Greens, requesting they take a look at our 2022 'Back The Bike' Policy Paper, and respond to us with any commitments their party is able to make to active transport at this election.

Since the government called the federal election in early April 2022, we have also been tracking the additional commitments that each party has made, either specific to particular electorates or nationally.

Here is a summary of what each party has committed to so far this election:

Closer to the date of the election, The Australian Labor Party supplied a more comprehensive response, readable here. The response included a number of commitments, such as;

Nearby in Perth's northern suburbs, the Labor candidate for Pearce, Tracey Roberts, has pledged $1.5 million to fund a bike path along Hartman Drive in Wanneroo. The path will link with Gnangara Drive and Ocean Reef Road.

Down in the electorate of Dunkley, candidate Peta Murphy has pledged $2 million in funding to deliver the Frankston Arts Trail, a 7.4 kilometre walking and riding trail that will make stops at new and existing public art exhibits across Frankston.

In regional New South Wales, Eden-Monaro candidate Kristy McBain has announced $1 million for works on the Bombala to Jincumbilly section of the Monaro rail trail.

In the nation's capital, Senator for the ACT Katy Gallagher promised $5 million this week to build improved cycle paths through the Inner North.

Finally, in the electorate of Casey the ALP have pledged $4.9 million to complete Stage 2A of the Yarra Valley Trail, which would run between Yarra Glen to Tarrawarra, with the vision to eventually connect the trail with Healesville. The Federal Minister for Infrastructure, Transport and Regional Development, Barnaby Joyce MP, responded to our letter this response. The letter did not include any commitments from the Liberal / National Coalition but did highlight some of the spending of the Coalition in their 3 most recent years of government, such as:

A number of Liberal / National party candidates have made active transport infrastructure commitments to their local constituencies.

In Victoria, Dan Tehan, along with candidate for Dunkley, Sharn Coombes, and candidate for Flinders, Zoe Mckenziem announced $5 million for a Peninsula Trail extension between Moorooduc and Mornington. In Mallee, candidate Anne Webster has pledged $13.5 million for the Murray River Adventure Trail, a continuous trail along the river from Red Cliffs to Yelta for walking and riding.

Up in Queensland, candidate for Longman Terry Young has announced $11.8 million to upgrade Old Gympie Road, which include bike lanes and pathways. 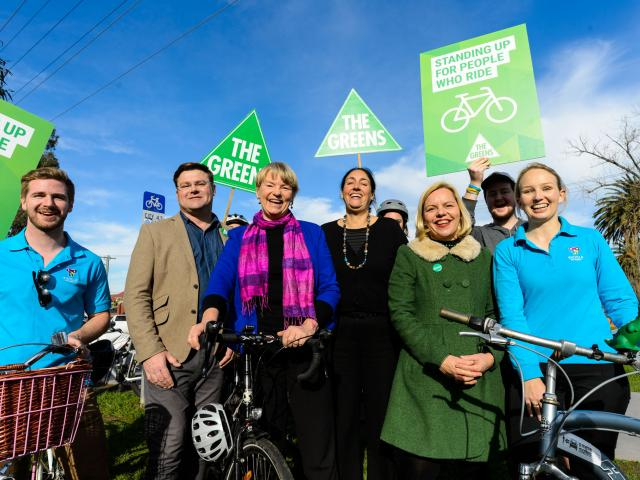 Sarah Hanson Young, senator and transport spokesperson for the The Australian Greens, responded to our letter with a $500 million per year commitment to make riding and walking safe and accessible. The policy includes a number of other key commitments such as;

On top of this, Australian Greens Candidate for Wills, Sarah Jefford responded to our letter, sharing her story as to why she supports the construction of active transport infrastructure.

Down in Tasmania this week, the Greens announced an $18 million plan to get Hobart on bikes. The investment, which matches the ask from Greater Hobart council mayors, will be used to kickstart the city's active transport network.

Outside the major parties, we have also seen some promising commitments that will benefit people who ride bikes.

In the Victorian seat of Kooyong, Dr Monique Ryan has pledged to fight for more bike and walking paths in her electorate, calling on the Federal Government to use the $65 million earmarked for car park facilities to instead be used for the Box Hill to Hawthorn bike path.

The Australian Democrats have flagged their full support for the five policy priorities in our Policy Paper, including our recommendation that 5 per cent of the federal transport budget be assigned to active transport projects.

Bicycle Network has also received letters from Allegra Spender (Wentworth) and Kate Chaney (Curtin) responding to the bike priorities set out in our 'Back The Bike' Policy Paper.

Seen a funding announcement that isn't in our article? Please let us know!

You can send an e-mail to campaigns@bicyclenetwork.com.au to provide a tip-off (be sure to send us a link to the source as well).