There will be concentrated construction activity for the next two months as the notorious roundabout at Porter Street in Templestowe is converted to a controlled intersection.

The works are part of the Fitzsimons Lane upgrade project. Crews will be working around the clock, 24 hours a day, 7 days a week, to complete six months of work in seven weeks. 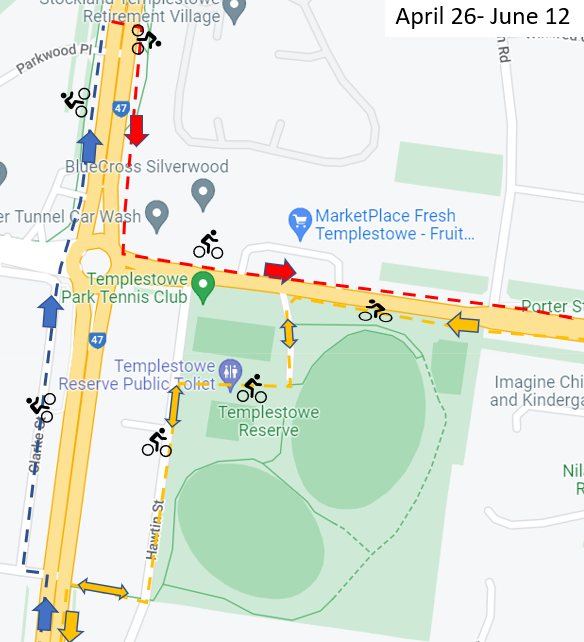 Once finished the intersection will be better for bike riders, but there will be difficulties during this coming construction phase.

From Anzac Day until 12 June Williamsons Road and Fitzsimons Lane will be changed to two lanes north and south, running virtually against each other with no room for bike facilities during this period.

Contractors recommend riders use the footpaths on the western and eastern side of Fitzsimons Lane and heading northbound along Williamsons Road you will be able to use Clarke Street and cross Porter Street to continue riding parallel to Fitzsimons Lane.

If you are travelling along Porter Street East there will be a detour route for riders and pedestrians through the Templestowe Reserve. See map below.

The workfare being done in two stages, with stage two starting on 14 May. These stages will address different legs of the intersection, altering detour arrangements for general traffic.