The one kilometre shared pathway is up to four metres wide, includes a quaint bridge crossing and boardwalk and was co-funded by a $1.2 million Cycle Network Local Government Grant (CNLGG).

Like the recent opening of the $1.6 million Dennis Road to Murrajong Road shared pathway, this project was identified in the Springwood Summit and delivered from the Council's $5 million Springwood Summit Implementation.

Logan City Council Mayor Darren Power said "This is a great outcome for the city and the local community and shows yet again that Council is delivering on the ideas put forward at the Springwood Summit.” 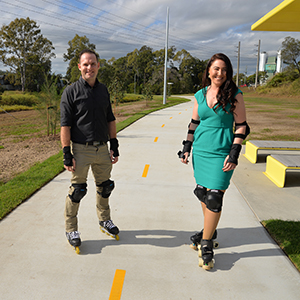 Member for Waterford Shannon Fentiman said the project would deliver safer facilities for bike riders and the community:

“We know that on average every dollar the Palaszczuk Government invests in bike-riding infrastructure returns nearly five dollars in economic benefit to Queenslanders."

“We have seen a significant increase in the use of our bikeways in recent years. That’s why we’re investing more than $15.5 million in funding to local governments to deliver new high-priority bike networks over the next two years."