The ride and event was great – very well organised – and friendly/helpful staff and support vehicles. It was great to have the roads closed on the climbs so that we could just concentrate on riding.

I wasn’t too fussed with the cold and wet conditions. My friend Ben and I just kept going, and going... and going.

We ended up completing the ride in 12 hours and 36 minutes – a very hard day. Finishing in thick fog, the road would unravel ahead, as we rolled from the top of Falls to the finish line.

Surprisingly, I am now wondering about NEXT year and wondering if I can complete it in a faster time. Perhaps I should get a better rear cassette, the 11-28 was tough!

Thanks for all the support! 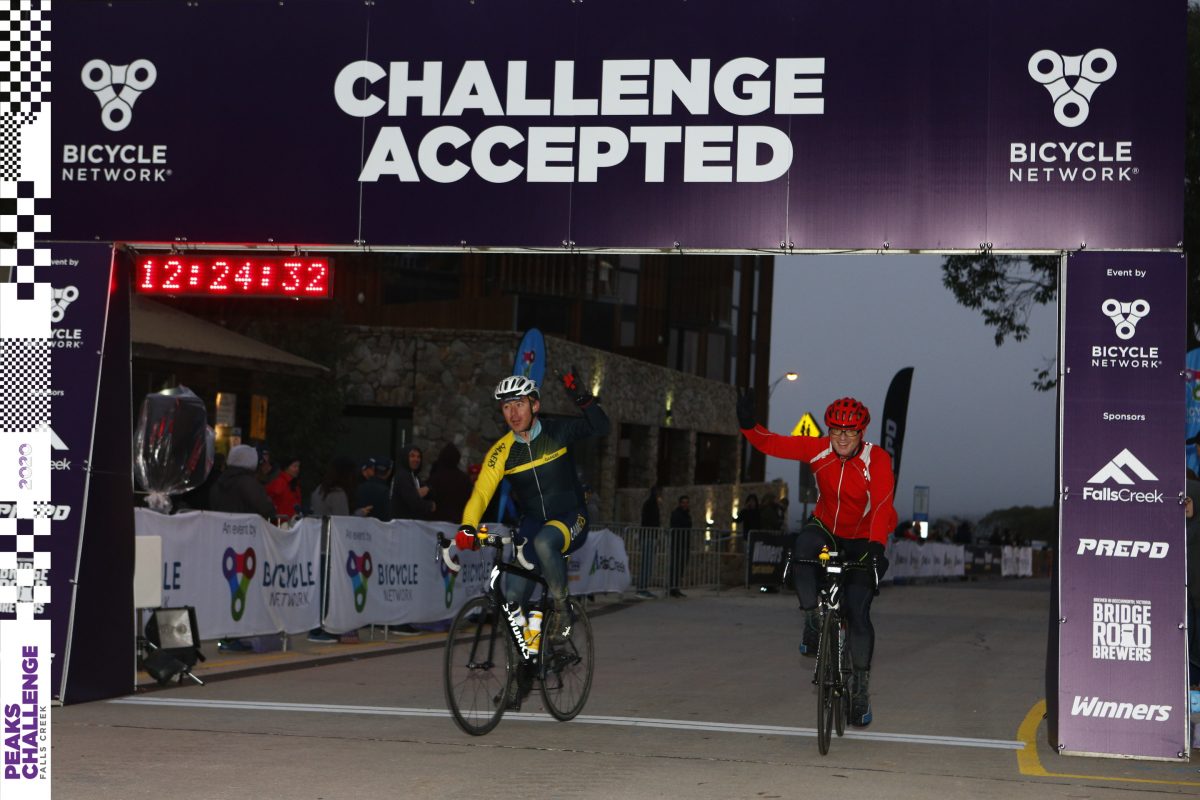 Peaks Challenge Falls Creek is one of the toughest things you can do on a bike, but for Chris O'Connor, riding uphill for 13 hours is nothing compared to what his sister Kath had to fight.

Chris had been considering taking on the Peaks Challenge ride for a few years and decided that 2020 was the year.

After Kath’s spinal surgery, she was left with no feeling below the ankles, and confined to wheelchair. Chris planned to use the ride as a fundraiser to buy a second-hand car, that could be converted to use hand-controls giving Kath independence and mobility.

But sadly, she passed away six weeks before Christmas.

As a tribute to his late sister, Chris is continuing to fundraise for the Cancer Council through his ride so that in the future people don't have to suffer like Kath.

An added inspiration is that this year's Peaks Challenge Falls Creek will be held on International Women's Day.

"I still have the same big challenge, but now it's a tribute to her, and the amazing life she led," says Chris.

It's one month TODAY until @Bender6amer and I tackle one of the toughest road rides that either of us have ever done.

I'm doing this event as a tribute to my sister Kathryn O'Connor - who lost her battle with cancer, less than 3 months ago.https://t.co/dUFDB1wrMz

Peaks Challenge Falls Creek is known as one of the world's most gruelling cycling events – it's a 235 kilometre ride with 4,000 metres of climbing up the three mountains of Tawonga Gap, Mount Hotham and Falls Creek.

It has a 13-hour time limit and sees people cross the finish line covered in sweat, tears and sometimes blood.

It's comparable to completing an alpine stage of the Tour de France, and with the on-road support from Bicycle Network, it's the day that amateur cyclists get to ride like a pro.

2020 is the 11th edition of the ride and is set to be special one with Bicycle Network participating in Ride High Country's #RollOnBack campaign to support communities affected by bushfires.

While Peaks Challenge Falls Creek has always been a personal test, the reasons for taking on the test are never selfish, which is shown in Chris's fundraising efforts. More than $1,000 has already been donated by fellow riders and friends.

To support Chris and make a donation you can visit his fundraising page on the Cancer Council website.

Update: After setting an original goal of $2,000, Chris has doubled this to $4,000 because of a huge response in the first 10 days of fundraising! Thank you to everyone who has donated.

Donate to Peaks Challenge for Kath