The results from NSW Police’s latest blitz on bike riders and pedestrians shows that people who ride bikes in Sydney are generally obeying the law.

As part of Operation Pedro held on Monday 23 September, 132 infringements were handed out to the city’s bike riders for a range of offences including riding on the footpath, not wearing a helmet and disobeying traffic lights.

The penalties for these cycling offences range from $144 to $344.

At the same time, 77 motorists were fined for offences and 113 pedestrians were fined.

There are no specific statistics on the nature of the motorist infringements and whether any were fined as part of the state’s minimum passing distance laws.

The breakdown of infringements for bike riders:

Running since 2014, Operation Pedro is undertaken by the Central Met Highway Patrol with support from a number of Police Area Commands within the region. The aim of the operation is to raise road safety awareness for all road user.

However, Operation Pedro has a chequered history with the bike riding community, with police previously accused of unfairly targeting bike riders under the guise of safety.

Bicycle Network spokesperson Anthea Hargreaves said that the results from Operation Pedro show that the vast majority of bike riders continue to do the right thing.

"Riding a bike offers so many benefits - we should spend more time actively making it easier and more comfortable rather than stinging people with fines."

Bicycle Network always encourages riders to obey the law, particularly traffic lights which is the only offence that appears to have increased (see graph below) since the previous operation.

NSW also remains only one of two states in Australia (the other being Victoria) that doesn't allow people of all ages to ride on the footpath. In July 2018, the age of footpath riding was raised to 16 in NSW.

Below is a comparison of infringements issued during Operation Pedro to people who ride from December 2017 - September 2019: 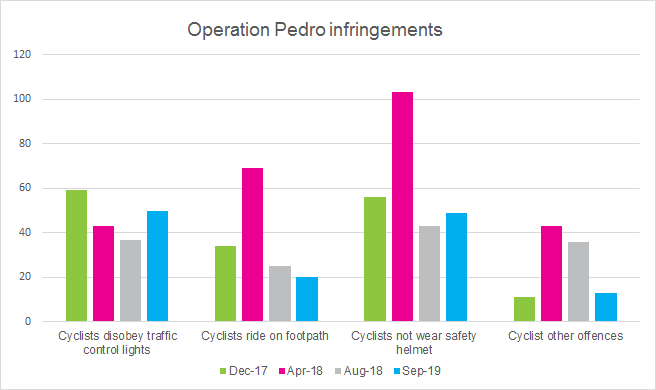