This is Craig Hobart's story of riding Peaks Challenge Falls Creek in 2013, the year that bushfires forced a change to the route. He's titled it 'Peeling the Onion'.

So it hurt, let’s just say the first 170 kilometres went pretty much to plan, covered in 6.5 hours.

What happened next was a story of peeling the onion. The warning signs were between Ovens and Running Water in 45 degree heat when I ran out of water, and stopped producing sweat (my skin was dry).

I crawled into Running Water and couldn’t hold down the fruit cake they were handing out, and after drinking three litres of water and picking up two gels, I rolled out thinking 60 kilometres in three and a bit hours, maybe...

But not long after the roll out my body started to shut down, I rolled to a stop halfway to Mount Beauty, and laid down under a tree and realised my plan was changing from a time target to trying to finish.

Turnip's story from last year gave me a new goal. Ed's note: we're not sure what Turnip's story is, but it sounds like it could be good.

After about half an hour, I got going again and got to Mount Beauty feeling stuffed but OK.

I laid down again in a car garage on the concrete in the shade and had a Powerade, an icy pole, and opened a bottle of Coke, but decided to ration the Coke for the 30 kilometre climb ahead. Once again I drank a couple of litres on water and topped up.

At this stage I was still hoping for a 5:30pm finish.

The 16 kilometre ride up to Bogong Village was goal one. I faltered about 500m from the village and had to lay down again, this time I was too tired to move into the shade. I somehow thought putting my hand over my face was the shade...

I was also out of water again, but fortunately at the village I got two bottles filled, and I finished my coke.

Crossing the bridge for the start of the second half of the climb (16 km to go) I felt good for about 500 metres, then started to cramp up.

I kept going until about 12 kilometres to go when I needed to lay down again, and once again somehow managed to have the shade disappear, my arm providing the shade. I tried to ride but I couldn’t, so I began to walk. I got going again, but now the cramps were pinging constantly.

I finally collapsed at 8 kilometres to go, in the shade this time, next to a stream, and was completely gone. I couldn’t get up, every time I tried my legs cramped, pinning me to the ground. Eventually a motorbike official saw me laying down and came back to check on me. I was out of water again, so he raced up to Falls Creek to fill my water bottles and called the SAG wagon. Somewhere during this time the ER family showed up – Flash, Dopie, B1/M and someone else (sorry I can’t remember clearly what happened). I said I was done, as I couldn’t move anyway, and accepted my fate. The guys were great, in defeat I had found victory.

I rang my wife and said I was OK, I remember saying "tell the boys I tried...".

The motorbike official came back and gave me my water, and again radioed for the SAG wagon, and I had to get him to help me to my feet as I couldn’t stand up (my legs cramped when I tried). I said to him I would walk until the SAG got to me.

I had time laying there to reflect on everything, and to say its OK to stop now.

But two things happened, I never stopped looking at my watch, and the storm clouds started to form overhead complete with thunder. I still had about two hours until the cut off, and I knew a combination of walking and riding might get me there.

Like a miracle the temperature started to drop rapidly (it was still mid-thirties before the clouds rolled in). I kept walking, then rode a bit, then stopped, then walked, then rode, then stopped. I couldn’t walk the bike in a straight line, so I put it over my shoulder. I kept my head down when a SAG wagon went past.

I knew Danny and Dopey stayed at the YMCA there and rode to the start from there... only 4 kilometres to go and one hour until the cut off.

I don’t really now what happened over the next hour, even the sight of Falls in the fading light didn’t help much.

Then another miracle, Stealth had walked down from the village to find me... thanks mate! The guy who finished first in our group was there to help me home.

He walked with me then I got back on my bike, and he pushed me like the Tour de France!

I was overwhelmed by the people standing in the dark urging me forward to the finish.

I made it with five minutes to spare, and a medic whipped a chair under me – I couldn’t make it to the tent for my jersey!

Then the final layers came off the onion, I was shaking, crying, and unwilling to do anything. My head in my hands I was offered some soup, but I couldn’t look at it, nothing had stayed down since Running Waters.

You learn a lot about yourself sometimes, with 8 kilometres to go I was defeated and content, then I saw the possibilities again.

It took me 6.5 hours to cover the last 60 kilometres, and it gave me the experience of a lifetime.

Wow, had to write that down... now I can relax.

Think you've got what it takes? 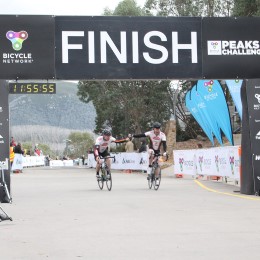 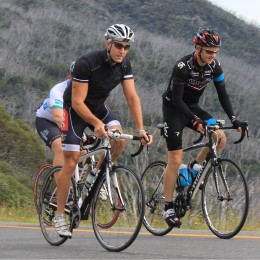 10 times Peaks finisher Mark McLean told us it never gets easier, but having a group of like minded "nutjobs" by your side makes the... Tom Pawikowski – continuing through the cramps

Tom Pawikowski shares his story of blind determination, painful setbacks and dogged perseverance in his quest to cross the finish line at Peaks Challenge Falls...