The City of Melbourne has acted to improve the chaotic situation facing bike riders attempting to get around the roadworks outside Flinders Street Station.

Fresh road markings have been applied to make it clear to drivers that people on bikes are sharing the lane on the approach to the Swanston Street intersection.

Towards the intersection, space has been created to allow bikes to store at the traffic signal.

Although observation today did show that vehicles, signalling to turn left, were perched in the bike lane rather than the left turn traffic lane, and blocking the bikes behind them.

The other deflating news is that the proper bike lane along the station will be missing in action for another two weeks.

Bicycle Network thanks members and riders who contacted the council to ask for a fix. We will continue to monitor the situation and appreciate that the state government and the council have acted to restore some functionality to this busy bike route.

It should not be forgotten that there are more people on bikes using the bike lane to get into the city in the morning than there are people in cars in the adjacent traffic lane.

Yet it was the bike lane that was removed for the road works.

Melbourne can do better.

Is it working for you?

Let us know if you come across any further issues at the intersection or have concerns about the way it is working.

You can get in touch here. 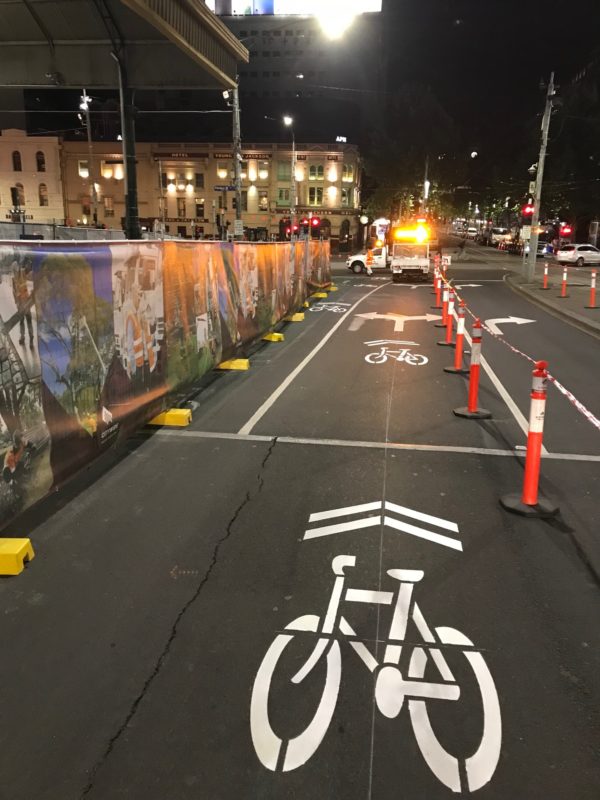 The new sharrows on the bike lane.