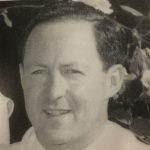 Every RACV Great Vic rider should be thankful for his contribution. In the 1980s he helped set the standard for pre-route planning by identifying and minimising on road risks. He was also an active member of the State Bicycle Committee for almost 10 years.

His extraordinary prevention work went way beyond bike riding. He was instrumental in turning ambulance officers from drivers with first aid training into trained medical professionals, which has no doubt saved many many lives.

While he was known as a quiet person it seems he had a quirky sense of humour. While a resident doctor at Prince Henry Hospital he was known for riding his bike down the corridors.

Ric Bouvier passed away in May 2017 aged 93. We’re all no doubt much better off thanks to his extraordinary contribution.