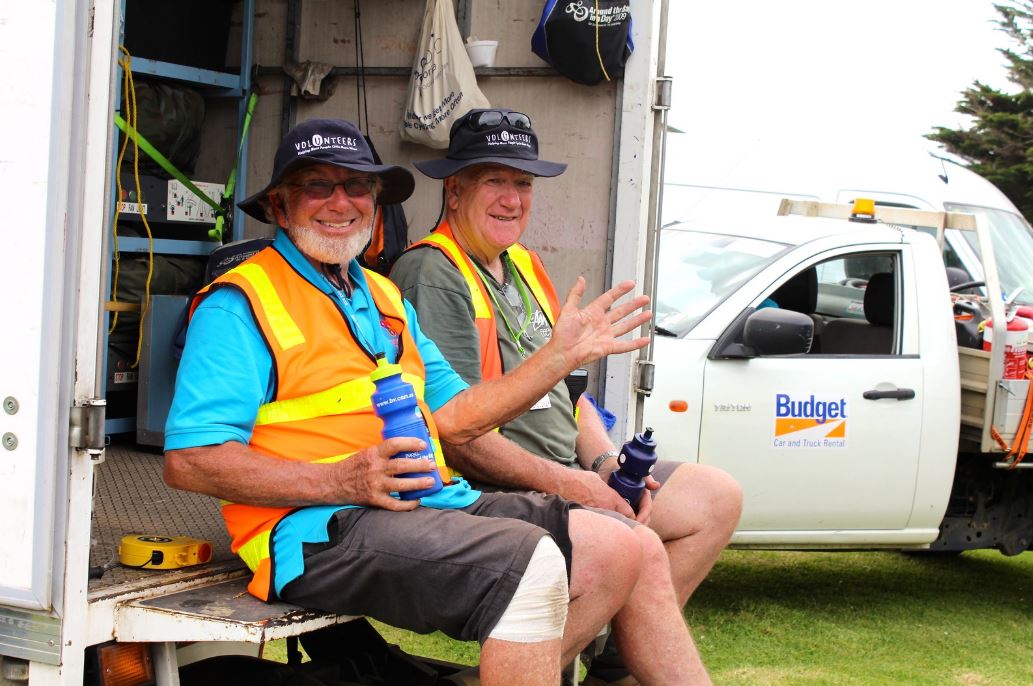 Dr Robin Greenwood-Smith, known to the Bicycle Network family as “Uncle Robbie”, was a retired nuclear physicist, a passionate Demons fan and a recreational bike rider living in Mount Martha, when he put up his hand to join the volunteer team.

He had ridden several rides, including the 2004 Great Melbourne Bike Ride, with a big group of the Greenwood-Smith crew, the day after which the first two of his eleven grandchildren were born.

Robin’s first event as a volunteer was the 2005 Great Tasmanian Bike Ride, where he worked under the leadership of the wonderful George Giles and alongside Terry Watt and Grant Whiteside. Grant says, “we were a jolly quartet.” This was the beginning of Robin’s Campsite Services Team volunteer career, managing all of the power and water in and out of each campsite.

Sarah, Robin’s niece was Ride Director on this ride and he quickly became known to all as “Uncle Robbie” or simply, “Uncle”.

His mate and co-volunteer Grant, remembers one day on the 2005 Great Tasmanian Bike Ride when Uncle Robbie read the ingredients list on the lunch wrapper of a chicken schnitzel baguette and tried to convince all and sundry that it contained the knee of a South African ‘Chut’, a bird on the endangered list.

Grant says, “I still giggle to myself when I pass the chutney in the sauce aisle and think of Uncle Robbie!”

Uncle Robbie was hooked after the first ride and went on to volunteer on many rides over ten years, including nine Great Victorian Bike Rides (2005 – 2008 and 20102014) in the Campsite Services Team, for which he was Team Leader from 2010.

Whilst living in Mount Martha, Uncle Robbie also started volunteering in Sorrento for Around the Bay in a Day. He was Team Leader of the Sorrento Ferry Team in 2009 and 2010. In 2011, Uncle Robbie volunteered on the 3 Peaks Challenge in Falls Creek, again in the Services Team.

Nikki Tyler was another Bicycle Victoria Ride Director around the time Uncle Robbie started volunteering. Nikki says “Uncle Robbie, as we all fondly called him, was the most wonderfully unique, gentle and caring guy with a sneaky sense of humour. I’ll remember the twinkle in his eye as he made jokes that sometimes the rest of us were not quite smart enough to understand – and he knew it!”

General Manager of Rides at the time, Vincent Ciardulli says, “I had as many laughs as debates with Uncle Robbie. He was one of the people that helped turn our events into what they are today. I will always be indebted to him and how he supported us during our custodianship of the event.”

Bicycle Network’s Workshop and its crew were very close to Uncle Robbie’s heart. The team were devastated to hear of his passing. Loris said, “ I have such lovely, fun memories of great times at the workshop with dear Uncle Robbie.” He certainly enjoyed the chance to work behind the scenes in preparation for each ride, building and fixing equipment, whilst chatting and sharing jokes with the workshop crew.

After many years of volunteering, in 2009 Uncle Robbie had a great time riding the Great Victorian Bike Ride with his youngest daughter, his niece and her partner. He found it very interesting to experience the ride from the other side of the hose fittings and loved having a big crew of volunteer mates to chat to at each campsite. He was quite the celebrity!

Bicycle Network team members remember Uncle Robbie as being a “character” who had “a happy impact on the world” and that he “was always so much fun on the rides.” Another Ride Director who worked with him, Pip Vietz says, “he was such a lovely and giving man.”

One of his fellow volunteers, Alison, remembers Robbie as having “a bit of spunk”. She says, “He was one amazing man who certainly left his mark on the world.”

In 2013, Uncle Robbie was recognised as a life member for his contribution to Bicycle Network. Life membership is awarded to volunteers who have been with Bicycle Network for more than 10 years and donated at least 50 hours of time on events in each of those years.

With his commitment to the rides and the workshop team, Uncle Robbie was certainly well deserving of this recognition.

In recent years, he lived in Coffs Harbour with his partner, Paula, a friend from his childhood. Paula says, “Robin told me so many stories of all aspects of the work that was involved in getting and keeping the huge show on the road. I loved hearing the stories and loved knowing how important being a part of it was to dear Robin.”

Uncle Robbie was diagnosed with cancer in 2017 and managed fairly well with treatment until his last few weeks, when his condition deteriorated. He was admitted to John Hunter Hospital in Newcastle and Coffs Harbour Base Hospital. Throughout his final days he was surrounded by his loved ones and he died peacefully on Saturday 14 March 2020.

Thanks for everything you taught us on the rides Uncle Robbie and for making us think and think again (and again until we got it right). Your hard work and attention to detail were out of this world! Thanks for the toilet humour (an essential part of the Campsite Services team role), for your cheekiness and for making us laugh. Thanks for listening when we needed to chat and for your advice – we all loved having you as our Uncle on the rides!

For a final word, at which the WARBY team are experts, WARBY Tom remembers Uncle Robbie as being “everybody’s favourite uncle, such a lovely man with a huge heart” and WARBY John says, “The world has just lost another good bloke.”

This tribute was written by Sarah Greenwood-Smith