Minimum passing distance laws have been introduced in all states of Australia.

What are minimum passing distance laws?

Minimum passing distance laws make sure people driving cars give comfortable clearance when passing or overtaking someone riding a bicycle.

Amy Gillett Foundation’s A Metre Matters campaign has been active since 2009, calling for drivers to leave a gap of at least one metre when passing someone riding a bike.

In October 2015, South Australia became the first state to introduce minimum passing distance laws. One by one, each Australian state introduced the laws, with Victoria becoming the last state to do so in April 2021.

When overtaking someone riding a bicycle, drivers must allow a minimum distance of:

To make passing easy, drivers can cross double or solid lines when overtaking someone riding a bike, as long they have a clear view and it is safe to do so.

Bicycle Network made a submission to the Victorian Parliament cross-party Economy and Infrastructure Committee inquiry into passing distance laws.

Previously, Bicycle Network had not campaigned for MPDL. The change in policy was the result of a public policy review which collected research and held public hearings.

The parlimentary inquiry makes the recommendation to change the road rules to include MPDL.

The government announces that it will not legislate MPDL in Victoria. See the government’s response.

Instead, it outlined a two-stage approach to reduce the crash rate for bike riders:

“We are disappointed that the Victorian Government isn’t following the lead of other states turning MPDL into legislation,” Mr Richards said.

“It’s clear that bike riders want a MPDL and today’s announcement is a huge missed opportunity to bring Victoria into line and further reduce to the risk to bike riders on our roads.”

“At the end of the day, we want the best outcome for all road users and we hope that the government’s new education campaign is strongly tied to behaviour change methodology.”

Following the announcement, Bicycle Network has evolved its position, calling for the introduction of MPDL, without a trial.

Following a well-attended morning rally in support of cyclist safety, Greens MP Samantha Dunn’s MPDL bill was tabled in the Legislative Council. The bill passed by 21 votes to 17, with the Greens, Coalition and Sex Party voting for and Labor and S&F party opposed.

By day’s end, the bill was put to the vote in the Legislative Assembly, with the Labor government and Independent MP Don Nardella used their majority to scuttle it.

WA McGown Government fulfills an election commitment and introduces minimum passing distance legislation, leaving Victoria and NT as the only state and territory who have yet to implement the law.

Bicycle Network alongside a number of other stakeholders including the Amy Gillet Foundation, were involved in the development of the campaign and was part of the group that advised the TAC and agency that created the ads.

Bicycle Network is calling for the introduction of a special policing unit to enforce the safe passing of people who ride bikes on the road.

A key ask of Bicycle Network’s pre-budget submission for 2019-20 in New South Wales and Victoria is not only the introduction of the law in Victoria but a program of active enforcement and widespread education.

Bicycle Network would like to see state governments in both states invest in an enforcement program that mirrors the successful Operation Close Pass by West Midlands Police in the UK.

Motoring group RACV has joined the calls for minimum passing distance laws to be introduced in Victoria and have asked the state government to release results from the 2017 Share the Road campaign.

Bicycle Network once again renewed calls for the introduction of minimum passing distance law as part of our six month stimulus plan, Pedalling to a better normal. The plan provides actions that can be implemented immediately in response to the economic and health challenges posed by the COVID-19 pandemic.

On 7 October 2020 the Victorian state government announced that minimum passing distance laws would be introduced during 2021.

The announcement was made at the same time as funding for pop-up bike lanes to encourage more people to ride during COVID-19.

Minimum passing distance laws were made active in Victoria from Monday 26 April 2021.

Why do the laws exist?

Minimum passing distance laws help both regular bike riders and also people who are interested in bike riding, but have concerns about sharing the road motor vehicles.

Minimum passing distance laws are part of the mix that will make Australia a nation of bike riders. Minimum passing distance laws will be active in Victoria from Monday 26 April 2021. 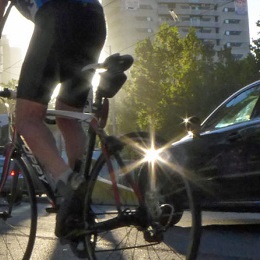 Minimum passing distance laws are set for Victoria and 100km of quick-build bike lanes will pop up in inner-Melbourne to help us reach COVID normal.

Motoring group RACV has joined the calls for minimum passing distance laws to be introduced in Victoria.

Reporting drivers who breach the minimum passing distance laws isn’t a simple process, which is why we’ve produced a guide with Tasmania Police.