A proposal to upgrade the Brunswick Tram Depot may imperil a section of the Upfield Trail along Cameron Street at the rear of the depot.

Illustrations from Public Transport Victoria (PTV) show that a third tram track will be positioned on a widened Cameron Street right where the recently built new section of the Upfield Trail proceeds north to Moreland Station.

Is there space, or will the bike path have to be moved, or even combined with the walking path beside it?

Bicycle Network understands that Cameron Street will be widened all the way to Moreland Road to make room for the third track.

The utility poles visible in the photograph above will clearly be removed, which will bring the road closer to the Trail.

Because the trail is at a higher level than the road, a retaining wall or some other structural element will need to be incorporated.

There ought to be enough space for everything to fit without touching the Trail, but it is likely that the option of moving the trail has not yet been ruled out.

At this location the new trail is currently a bike-only facility as the elevated rail project from Moreland Road to Bell Street provided for separate walking and bike paths.

The Brunswick Tram Depot upgrade plans were revealed in recent days when the project was placed on public consultation. You can add to the list of issues by clicking on the form.

Trams enter the depot at the rear of the premises, from Cameron Street which abuts the Upfield Trail and railway line.

The illustration shows the addition of a third siding track in Cameron Street for a terminus for route 6, as well as a new car park on rail land. 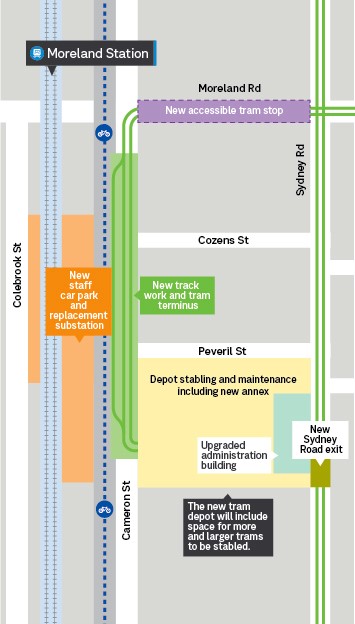 PTV has ensured that the driveway will not cross the trail from Cameron Street. The car park will also include staff bike parking facilities.

The Brunswick depot is being upgraded to accommodate bigger trams, including the new G-class, and more services.

The PTV says it wants to design and develop the project in a way that:

PTV has undertaken to work with Bicycle Network through the project to ensure that the special requirements of riders are recognised in the design and delivery of the project.