As we wait for the final opening of the Kingston Park and Ride bike cages, the government has announced plans for three more at Claremont, Rokeby and Midway Point.

Plans for the three new sites are open for comment until 30 July via the online Social Pinpoint maps: https://stategrowthtas.mysocialpinpoint.com/claremont-pnr/greaterhobartparkandridesites

The government seems to have learnt from the first stage of Park and Rides and has sited these three in places that are more easily accessible for people walking and riding.

Making it easy to park a bike is only part of the puzzle in getting people to ride to catch the bus. Building comfortable and obvious paths and crossings, or siting the Park and Rides next to existing paths may help to get some people to consider Bike and Ride.

Each of the Park and Ride sites has a bike storage cage but none of the plans have detail about how many bikes spaces will be available. The Kingston cages have a generous allowance so hopefully these facilities will be similar.

We are still waiting to hear what sort of system the government is going to install to provide security for the bike cages.

In other states such cages are accessed by a swipe card or phone app which restricts the number of people using the cage and can help track who has accessed it. This extra layer of security is needed to give people the confidence they can lock their bike and leave it all day, and it will be there when they get off the bus at night. It doesn’t mean that thieves won’t get into the cages, but it makes it more difficult for them; CCTV within the cages can be another deterrent.

Good lighting inside and outside the cage is also critical for users to feel safe.

The Midway Point Park and Ride is sited where the roadwork has been happening to widen the road, opposite the petrol station and shops.

It is well linked into the wide Fenton Road footpath which connects to the path over the causeway and into Sorell, which is due to be upgraded when the causeways are duplicated next year.

The crossing over Penna Road and slips lanes to get to one of the bus stops will need to be well designed so people can easily and comfortably get from one side to the other with or without a bike. The Claremont Park and Ride is sensible sited on the Intercity Cycleway for ease of access. The access path off the cycleway looks too narrow and may need to be widened so riders can easily get to bike cage and onto a bus.

Accessing the site from the north is not as easy because of the patchiness of the current path network. The proposed crossing points with pedestrian refuges in the middle of the road look like they would be too narrow and shallow for someone with a bicycle so should be widened.

The bike storage cage is right in between the two bus stops which is sensible to encourage people to ride but also to ensure high footfall/passive surveillance to increase security of the bike storage area. Another good siting decision has been made with the Rokeby Park and Ride, with easy access from the Pass Rd and Rokeby Rd shared paths. It will be opposite the proposed Coles and McDonalds site.

Like the other sites, the bike cage is in a location close to the bus shelters and here it is next to the car park entrance, to ensure more passing surveillance.

Also like the other sites the pedestrian crossing across Pass Road looks like it needs be wider and deeper for people with bicycles.

They have also designed a conflict point with the shared path running between the bus shelter and stop instead of behind the shelter, but that looks like it can easily be changed. 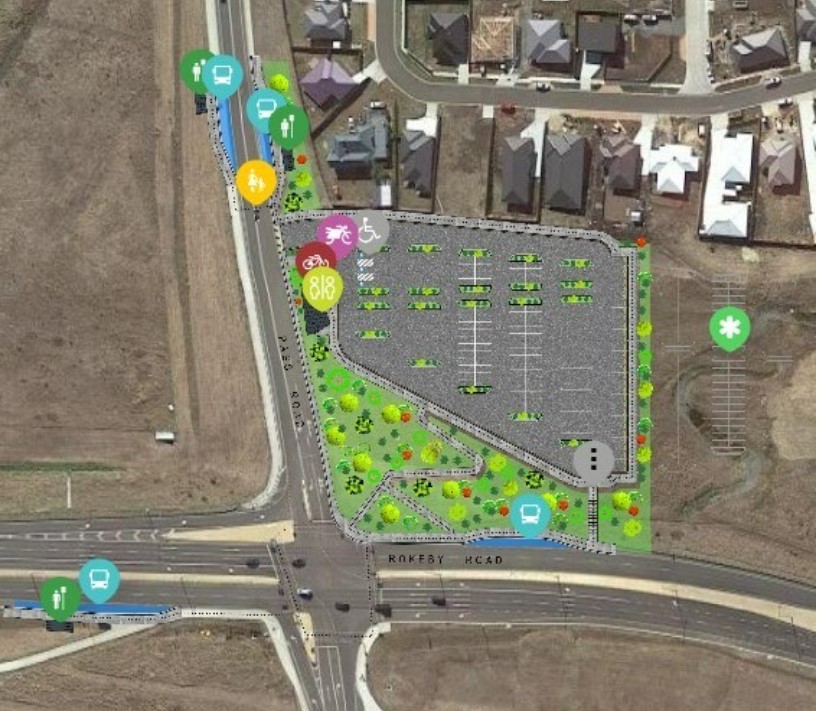