An intense 24-hour-a-day level crossings construction blitz will close the trail immediately north of Murray Road until early June. A detour will be in place.

The Railway Reserve bike path will be closed between Regent Street and Murray Road, including the Olver Street pedestrian crossing over the tracks.

The trail will be closed from 4pm Monday 16 May to 5pm Friday 3 June.

Detour is via Regent Street, William Street, Clinch Avenue and Murray Road. Signage will be in place. Traffic management will be in place to help you move safely around the area.

During this time there will be an increased number of trucks and heavy vehicles travelling on local roads including Watt Street and Clapham Street in Thornbury, Bruce Street, Edith Street, Clinch Avenue and Taunton Avenue in Preston.

Bike access to stations is being improved along with more and better bike parking facilities. 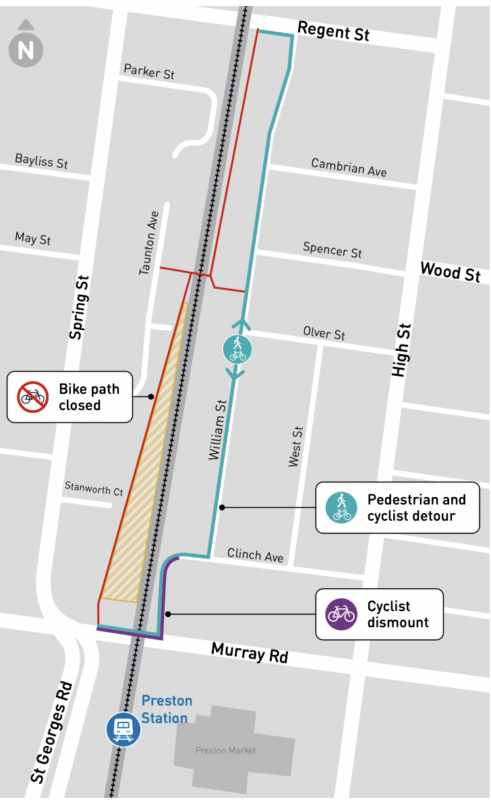 Upcoming works will include:

Riders should be aware that buses will replace trains on the Mernda line during this time. Bikes are not permitted on buses.

There will be road closures at the level crossing on Cramer Street, Bell Street, Oakover Road and Murray Road, during the works.

On-street parking will be removed on both sides of Taunton Avenue and Watt Street.

Effective from 30 May, the Mernda line will operate on a single track over the newly completed city-bound rail bridge between Thornbury and Regent stations for three months.

This will enable trains to keep running while the Mernda-bound rail bridge is completed.

During this time there will be minor timetable changes to the Mernda and Hurstbridge lines.