The Tasman Peninsula is the latest Tassie location to have mountain bike trails proposed to cater to the local thirst for shredding as well as providing another activity for tourists.

The proposal for a public mountain bike park is being put forward by the Tasman Peninsula Mountain Bike Association, which formed last year to lobby for government support for a network on the Tasman and Forestier peninsulas.

The Association has been active over summer: holding information sessions and posting their ideas online as well as starting conversations with the Tasman Council and Tasmanian Government as the landowners.

The basic proposal is to have a trailhead at Taranna next to the community centre then use the 21 hectares of land that the council has set aside for recreational use behind the centre and further up using state government owned land.

There would be three trailheads uphill, with three stacked loop networks of descending and climbing trails and a shuttle drop at the top of the range.

The highest trailhead is about 405 metres elevation and there would be some 86 km of trail in the final concept.

There would be an even mix of green beginner trails, blue advanced trails and black technical trails, with more of the green and blue trails close to the Taranna trailhead for easy local use.

The network is pitched at local riders, people who visit the Tasman Peninsula for a holiday and people who would travel to just ride the trails. 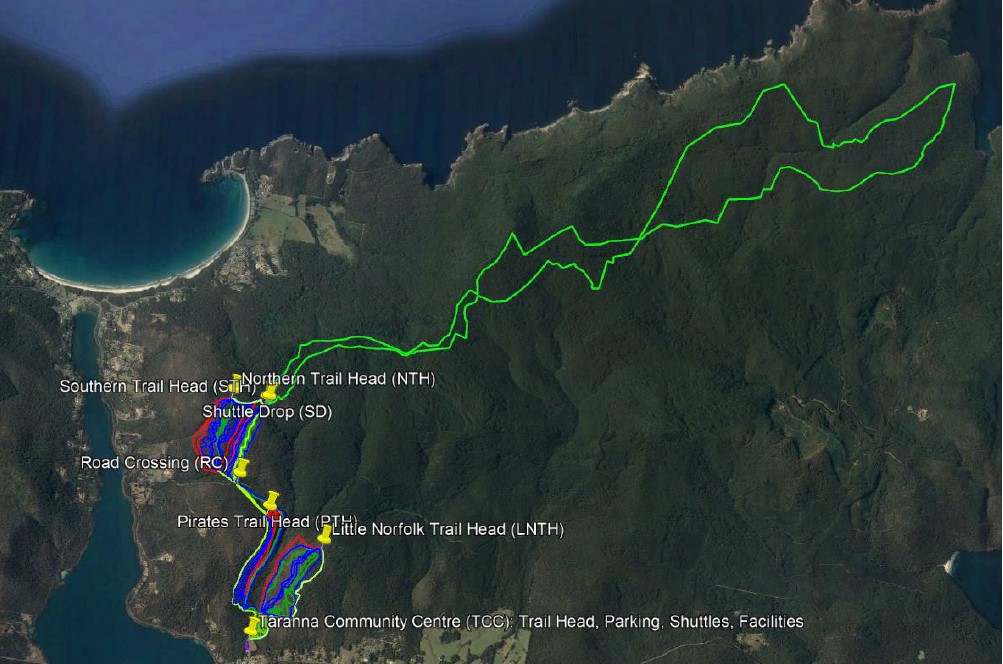 While much of the network is proposed for forested land that is currently being managed for logging by Sustainable Timbers Tasmania, there is also a 27 km adventure trail proposed for the ridgeline.

This adventure trail is proposed for land that was once set aside to be made a conservation reserve and is next to the Tasman National Park so any exact routing would have to avoid threatened plants and plant communities and habitat disturbance of threatened animals.

The Association is also proposing bike washdown stations, similar to St Helens to minimise the spread of weeds and pathogens like phytophthora.

A different focus for these trails would be the development of some of the trails as  inclusive so that would be wide enough and at such a gradient that people with disabilities could ride on modified bikes.

The proposal also points out the potential for short-term and long-term ebike hire to help more people ride the trails.

If you want to learn more about the proposal, there is a video presentation on You Tube and the association’s Facebook page @TasmanPeninsulaMTB has lots of information.

The next stage for the group is to get funding for a professional feasibility study to be completed.