Two major but incomplete trails in Melbourne’s south-east are in play for funding this Federal election.

The popular Caulfield to Dandenong bike link—the Djerring Trail—never actually made it to Dandenong. Instead, it peters out at Yarraman Station.

Also at Yarraman, the EastLink Trail is still waiting years later for the planned bridge over the rail line.

These two essential, and interlinked connections are overdue.

However, both are ready to roll, with feasibility studies completed and preliminary design concepts already prepared.

With the Federal election looming, followed by a state election later this year, the City of Greater Dandenong has seized the opportunity to advocate to the political combatants for these two projects, among others important to the community. 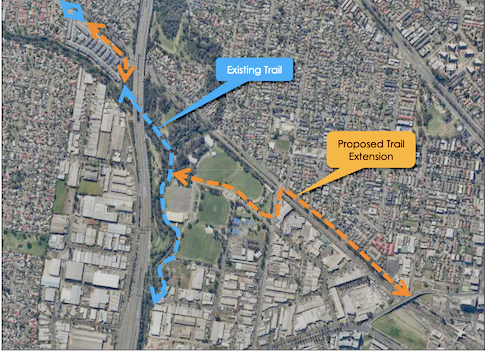 The City of Greater Dandenong has 98 kilometres of off and on-road cycling paths including the EastLink and Dandenong Creek trails.

The City says that despite this extensive network there are a number of locations where there are major deficiencies or where opportunities exist to extend and upgrade facilities.

Number one on the list is the continuation of the Djerring Trail to Dandenong.

"As part of the level crossing removal project along the Dandenong railway line the Victorian Government has completed a premium-grade shared user path between Caulfield and Yarraman stations,“ the City says.

"The shared user path caters for both commuter and recreation cyclists as well as pedestrians.

"However, the 2km leg from Yarraman Station to the Dandenong Station and Dandenong Metropolitan Activity Centre has not been constructed.

"Consequently, this relatively short section of the extensive Djerring Trail is a missing link between Caulfield and the south-eastern suburbs.”

The City has developed a design plan that demonstrates how this link can be developed in a practical manner at a cost of about $11 million.

With the recent announcement of major plans for the upgrade of central Dandenong, this connection is more important than ever.

The EastLink Trail bridge over the rail line is also crucial to future connections in this region.

The EastLink Trail is a popular recreational strategic cycling corridor which connects Carrum to Ringwood and beyond, but is severely interrupted by the Dandenong rail line at Railway Parade and Greaves Reserve, Noble Park and presents a major inconvenience to users, the council says.

As a consequence riders must tackle a circuitous 400m detour via a non-DDA compliant route across the rail corridor, creating a conflict between trail users and rail passengers within the station using the same route.

"To overcome these barriers there is a need to construct a new dedicated bridge over the rail line adjacent to EastLink to make the trail more direct, convenient and safer for trail users, whilst reducing barriers to walking and cycling,” the council says.

Again, the feasibility of the project has been thoroughly explored with an indicative cost of $7.5 million.

The council argues that its bicycle network provides a number of benefits to the community and the region including:

If you ride the EastLink or the Djerring Trail you will know how important these fixes are. So make your views known to the election contestants.