There are a few pathway and parking projects going on around Hobart at the moment so we’ve pulled them together here for you to see what progress is being made.

The extension of the Whitewater Creek path around the edge of Kingston Path through to Huon Road is rocketing along.

You can now easily access Kingston Park from the 3 metre wide Whitewater Creek path extension and it will eventually follow the edge of the park down to Huon Road and John Street.

The council is still working on the final section of the path which borders the new pump track and children’s cycling loop.

And as we report in Tassie Bike News Bites, the council has plans to extend the Whitewater Creek Track through to Spring Farm, making it a more useful route for people wanting to ride into Kingston. The Tasmanian Government has opened up car parking at the new Park and Ride at Firthside (Kingston) but we’re still waiting on the bike parking.

A building frame and roof for the bike shed has been erected but we’re still waiting on the walls and door and parking rails to go in.

When it’s finished the bike shed will have space for 23 bicycles with horizontal and vertical parking rails.

We’re also still waiting on what sort of extra security the government/Metro will provide for the bike parking. We’ve suggested a system like our Parkiteer cages in Victoria where people access cages via a swipe car or app and then lock their bikes inside, giving them two levels of security. We’ve been a little tardy in reporting the completion of this project, but you can now park your car at the Regatta Grounds and get straight on to the Intercity Cycleway rather than weaving through cars coming and go.

The extension of the cycleway was built as part of the car park upgrade and will one day link to the path through the Macquarie Point site. The path through Macquarie Point is now gravel and can still be ridden to the road access from Davey Street but may be closed on and off while they build the first land release so you shouldn’t rely on it.

We’ve had some complaints about the Cyclists Dismount site at the end of the extension where it reaches the road driveway access. These signs are just advisory, you don’t actually have to get off your bike - they are typically warning of a hazard or in this case the end of safe infrastructure. We’ve been waiting a long time for a safe crossing over Molle Street to join the Rivulet Path to Collins Street and it’s nearly here!

The City of Hobart have announced it will soon start installing a pedestrian crossing with lights at the intersection in coming weeks, so look out for crews on site. 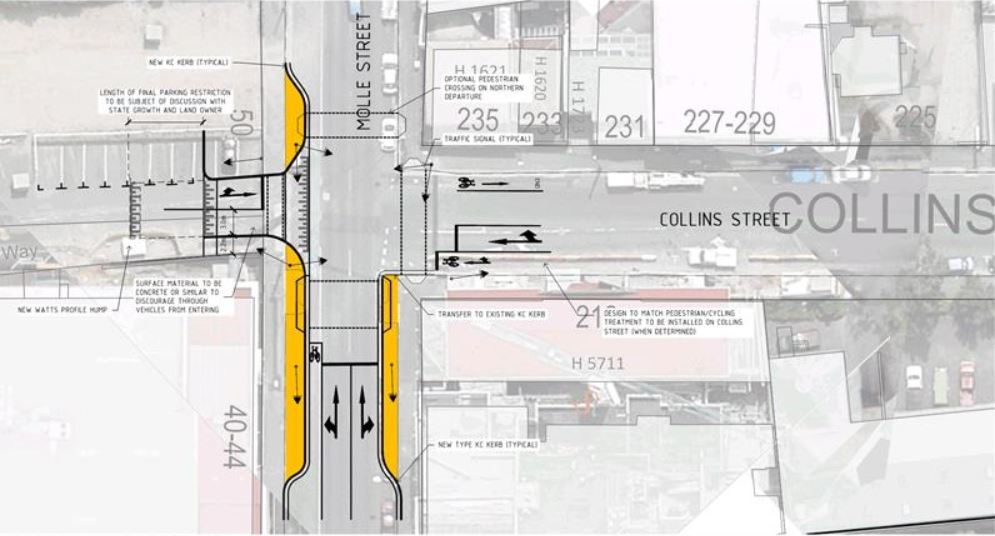