Ela moved to Australia from Poland eight years ago, and shortly after made the switch from mountain biking to road cycling, encouraged by her partner Seb who completed Peaks a few years earlier. Then when COVID reared its ugly head in 2020 and forced us all to rethink our routine; for Ela, this meant riding,

Ela wanted to do what she described as a “decent time without killing myself” which for her meant somewhere between 10 and 11 and a half hours.

"Obviously you need to finish it in 13 hours so there was that, and then the second goal was that I just didn’t want to spend 13hours on the bike”, she said.

Kicking off her training with Rapha's Festive 500 in December, Ela was in good stead going into a training program in January.

Even though Ela has never considered herself a climber she had before taken on Le’tape in France so was familiar with the struggle of climbing mountains, but not with the endurance aspect that comes with Peaks Challenge.

Ela stresses the importance of having a good group of people around her spurring her training along, and to share the experience with. There were a few riding groups that Ela divided her time amongst and was in good hands with a number of much more experienced riders in her midst from the outset.

One of Ela's experienced riding buddies acted as a personal coach and was able to follow and correct her posture, technique, and provide guidance to best get herself up the mountains:

Ela also explains that she thinks “climbing out of your saddle is underrated I think – because you need that break from your rhythm to actually ride for some time out of the saddle – it’s incredibly hard, unless you train for it”.

In addition to the on-road training there was also time spent off the bike doing plenty of leg exercises to ensure equal efficiency in both legs. Ela explains that her “coach would watch me and tell me at which state in my rotation I disengage my leg, and that’s where I would lose energy”.

After three ACL reconstructions on her left knee this was often her weaker side that needed more work.

All these little things seem so small but added together counted a lot towards Ela’s overall ride.

But despite preparation, the 80km ride from Dinner Plain to Omeo was almost Ela's undoing. The undulating road with a 10 minute section at a consistent 4% gradient seems easy compared the rest of the ride, but is no easy feat with 100km already in the legs, and the back of Falls still to come.

Sitting on the grass in Omeo, Ela's spirits were low.

“I’m thinking it’s not going to happen – I’m not going to finish”, and it was a decision to either cut-off now and wait for the bus or keep going to Anglers Rest.

It was at this stage that the FOMO (fear of missing out) started to kick in with Ela thinking; “I can start pedalling again and if I stop, I stop. Obviously, you need to prepare your body as best as you can – but the rest is in your head I believe. Ladies may not often realise or are maybe not often aware of how much strength we have in us in terms of the mindset – because I’ve done longer riders before, I knew when I’ll be struggling, if I’m bonking what I need to do, so I knew that about myself, but I also knew that if in my mind I’m determined to finish – I will." 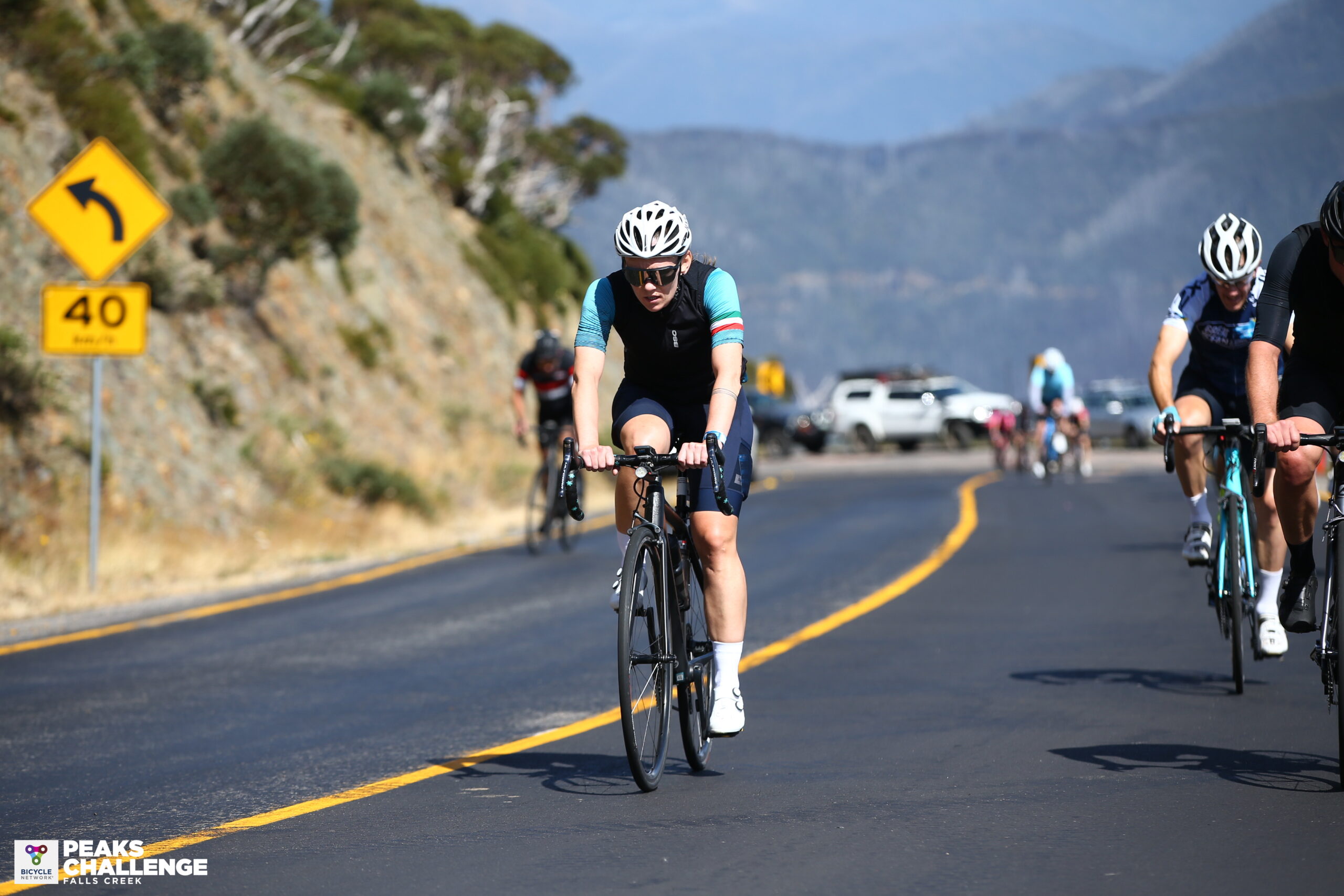 It was the epic scenery coming out of Omeo and around the bend towards the back of Falls that gave Ela her second wind. The rolling hills provided a small, short, but welcomed break as the infamous left turn up to the back of Falls was approaching.

Ela was greeted at the turnoff by volunteers with beaming smiles in anticipation for what was ahead. She came around the corner and instantly knew what everyone was talking about.

“As the legends have it, the back of Falls corner it’s pretty famous and that’s what I didn’t expect because I hadn’t seen it, I’d never been there, I’d only heard stories and it grew in my head a lot”.

But ultimately it wasn’t quite as bad as Ela had convinced herself it would be. Ela describes the feeling of climbing the back of Falls saying it was a “painful, slow and steady ride”.

She rode past people walking who were “encouraging me along up the climb. I saw women who were walking, and then got to the next rest stop at Trapyard Gap, and then kept riding, and that’s great!”

As Ela made her way across the finish line at 11hrs and 10minutes it was an overwhelming feeling of pride: “I was incredibly proud not only for me, but also for my friends that finished. For Seb, Emma and Ed – we’ve done it, I’m just so happy for us – we came here to do it, and now we can talk about it!”.

Ela admits that experience can be a bit intimidating, but that it’s not out of reach for any woman to have a go doing: “It is daunting, and I was scared. I didn't want to walk my bike up the steep hill, but  we’re all doing it for a reason, we want to challenge ourselves, and that’s already a win. Getting on your bike when it’s zero degrees at 7am descending that hill... that’s already a win and you can only get better – it’s daunting, but I would also say that we’re much stronger than we think we are when we get to it.”

At the end of the day Peaks Challenge is an event that will test your limits and leave you walking away knowing that what you did is not for the faint hearted.

In Ela’s own words: “if you love riding your bike, this event, no matter how much it hurts, or how daunting it seems, it’s a great place to ride your bike and it’s a great opportunity. The views are beautiful, the roads are beautiful, it’s one of the most beautiful places in Australia that you can ride your bike so give yourself an opportunity to do that because it’s absolutely worth it. If achieving that goal, that amazing challenge that you aspire to finish, that’s another thing that you can have. If you can tell someone that I’m a finisher of Peaks Challenge – that means something in Australia so that’s also an amazing feeling. Just go and ride your bike there – it’s really worth it!”

Be the first to hear when Peaks Challenge 2023 tickets open