Kingborough Council has released a draft bicycle plan to build a connected network of paths over coming years, which has had extensive input from local bike riders, Bicycle Network and Cycling South.

Kingborough’s current bike plan is 15 years old and was way overdue for an update.

The council’s Bicycle Advisory Committee (which is made up of local bike riders, council staff and councillors Amanda Midgley and Flora Fox) was instrumental in getting a new plan drafted that reflected the increasing population and desire to ride for transport on separated cycleways protected from traffic.

The plan sets out a network of separated cycleways to get people from residential areas to shops, schools, bus stops and other attractors like the beach, playground and sport grounds.

These kinds of cycleways are commonly known as All Ages and Abilities (AAA) with the rule of thumb being that you should be comfortable with your 8-year old son or your 80-year old grandmother riding on them.

Construction of much of this network will rely on state and federal funding but importantly the bike plan commits the council to do the preliminary work on priority projects so that they are ready to go when outside funding becomes available.

The network map in the bike plan is advisory, final routes wouldn’t be determined until that preliminary work is done by the council and this work may determine that some routes are not feasible.

The plan also focuses on the road network improvements that are needed for confident riders to be safer on the roads.

It nominates projects that are the state government’s responsibility, such as shoulder widening and sealing on the Channel Highway, so the council can lobby for these to be completed as part of government maintenance and road upgrades and well as local roads where the council can widen shoulders or mark wide enough shoulders as bicycle lanes.

As well as shoulder widening and sealing, the plan commits the council to lobby the state government to improve planning laws so cycleways and bike parking are part of new developments, for buses to carry bicycles, and bike parking at more bus stops. 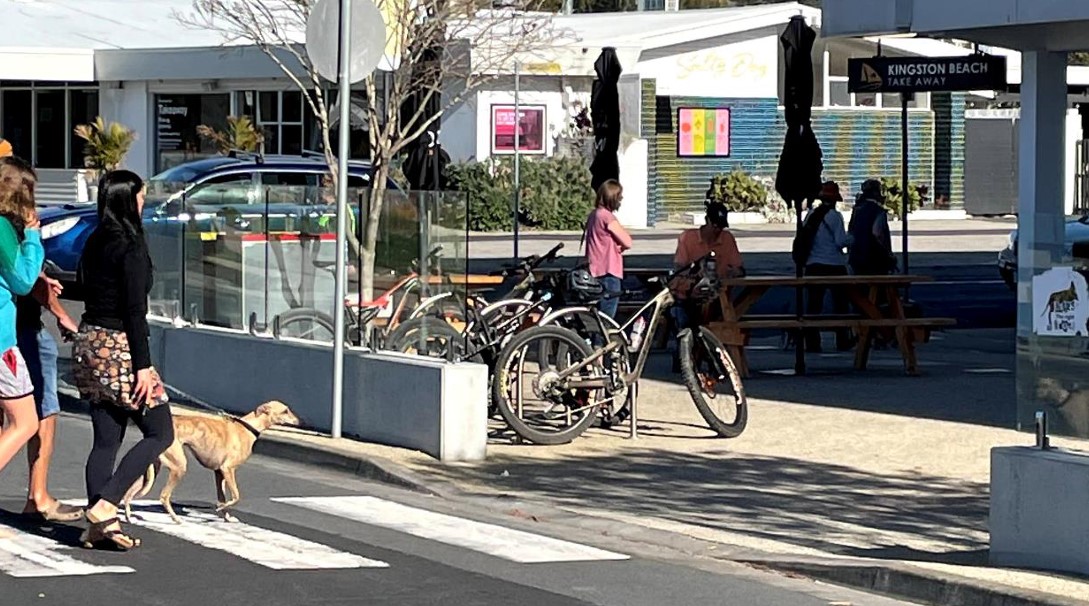 The bike plan focuses on Kingston and surrounds as that is where the bulk of people in Kingborough live.

The major AAA routes being suggested are:

The Appendix of the plan helpfully sets out what such cycleways and paths would like like, using examples from other cities.

The one flaw in the plan is the lack of a protected cycleway for the main couple of blocks of the Channel Highway through the centre of the Kingston shops.

Priority for people walking and riding through this area was a recommendation of the Place Score vision for Kingston, but this has not made it to the bike plan.

We’d like to see the protected cycleway planned for Channel Highway between Huntingfield and Kingston continue through into the shopping centre. It would then meet up with the Whitewater Creek Path and proposed path to Kingston Beach and sealed shoulder route over Bonnet Hill.

This is far more intuitive for riders than having to detour around the back of Kingston on the Whitewater Creek path.

We have put a short guide together to help people making a submission and to share with other people you think may want to comment.

What do you think of the Kingborough bike plan?

Email the council at kc@kingborough.tas.gov.au or fill in the online survey before 20 December 2021.