The government is calling for comments on how the Mornington roundabout in Hobart could be improved for cycling, walking, public transport and driving.

Anyone who has had to cross this intersection by bike or foot can attest to how hostile it is.

There are pedestrian/rider crossing points but you have to cross over four lanes of traffic driving at 60 km/h and when traffic is heavy it’s almost impossible to cross the intersection on foot or by bike.

There is also no obvious way to get from the southern side of the highway to the northern side where the Clarence Mountain Bike Park is. A narrow path on the bridge can only be accessed from the eastern side of the roundabout and on the other side disappears with no obvious path or crossing point to get to the MTB Park.

The government is calling for public comments but hasn’t put forward any plans or ideas for people to assess, but says on its website it has four options.

The obvious options to make it safer for people walking and riding are pedestrian/cycling underpass, a pedestrian/cycling bridge or paths on a new traffic bridge, or traffic lights with pedestrian crossings. Keeping the current set-up with a slower traffic speed wouldn’t help as the volume of cars in multiple lanes makes it too difficult to cross. The comments already up on the site attest to widespread dissatisfaction and fear of crossing the roundabout and how it’s forcing people into cars instead of riding or walking to where they want to go:

“As a cyclist, I wouldn’t even contemplate it. When my son was at McKillop, I had to drive him to school because as a pedestrian, he would be at serious risk.”

“An underpass for cyclists would be great. Vehicles coming off the Tasman Highway to and entering the roundabout are often not expecting cyclists.”

“Really needs to be an overpass to create a safe pedestrian/bike crossing area on this side of roundabout.”

“We live in Mornington and would like to ride to the bike track and to work in Rosny but it’s not safe to get through the roundabout.”

“I know a lot of people would consider riding to the ferry if it were safe to cross at the roundabout.”

“As a Mornington resident, I find it dangerous trying to walk or ride over to the bike park.” 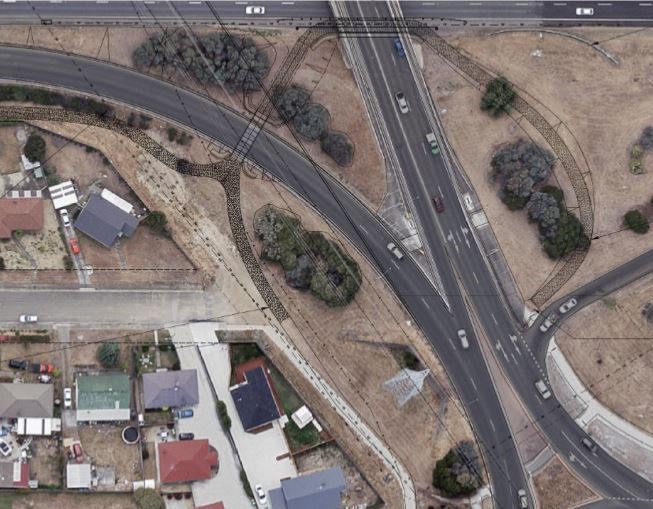 There have already been a few attempts to improve safety at the roundabout over the past 15 years. Cycling South, the organisation that coordinates the greater Hobart councils’ cycling efforts, lists these on its website:

It’s obvious the government has to stop tweaking at the edges at this intersection and provide a safer and convenient crossing for people walking and riding.

If you have personal experience or would ride through this area if there were safer crossings, let the department know.

Call for a safer roundabout

You can make your comments until Sunday 24 October via the online map at www.transport.tas.gov.au/Mornington