The state government is seeing your views on planning studies for the West Tamar Highway and Huon Highway, with deadlines for comment by mid August.

These planning studies are intended to guide future investment in roads and paths across the state, so getting your comments in now will help shape future projects.

The government is writing a 10-year plan for the Huon Highway corridor between Kingston and Southport but is looking at likely usage over the next 30 years, with a focus on improving safety and travel time reliability.

The entire highway would benefit from wider, sealed shoulders. This would help drivers by giving them more space to avoid obstacles or regain control of cars but would also give confident riders more space on the road so vehicles can safely pass them.

It would be good to see specific provision for less confident riders through residential areas and towns like Kingston, Huonville, Franklin and Geeveston via on-road separated lanes or off-road shared paths.

Those ideal routes may follow quieter or wider streets than the highway but it’s likely that sections of the highway corridor could be used to link paths.

There is also the possibility of promoting cycling touring routes in the south of the state utilising quieter back roads which may also include a few stretches along the Huon Highway, again necessitating linking paths or wide, sealed shoulders.

Shoulder seals should take into account people riding by ensuring the chip sizes used aren’t too large for standard road wheels, with 10 inch chip seal being the largest that is still comfortable.

You can view other people’s comments and make your own on an online map on the Department of State Growth website by 14 August: https://www.transport.tas.gov.au/projectsplanning/road_projects/south_road_projects/huon_highway_corridor_study_kingston_to_southport 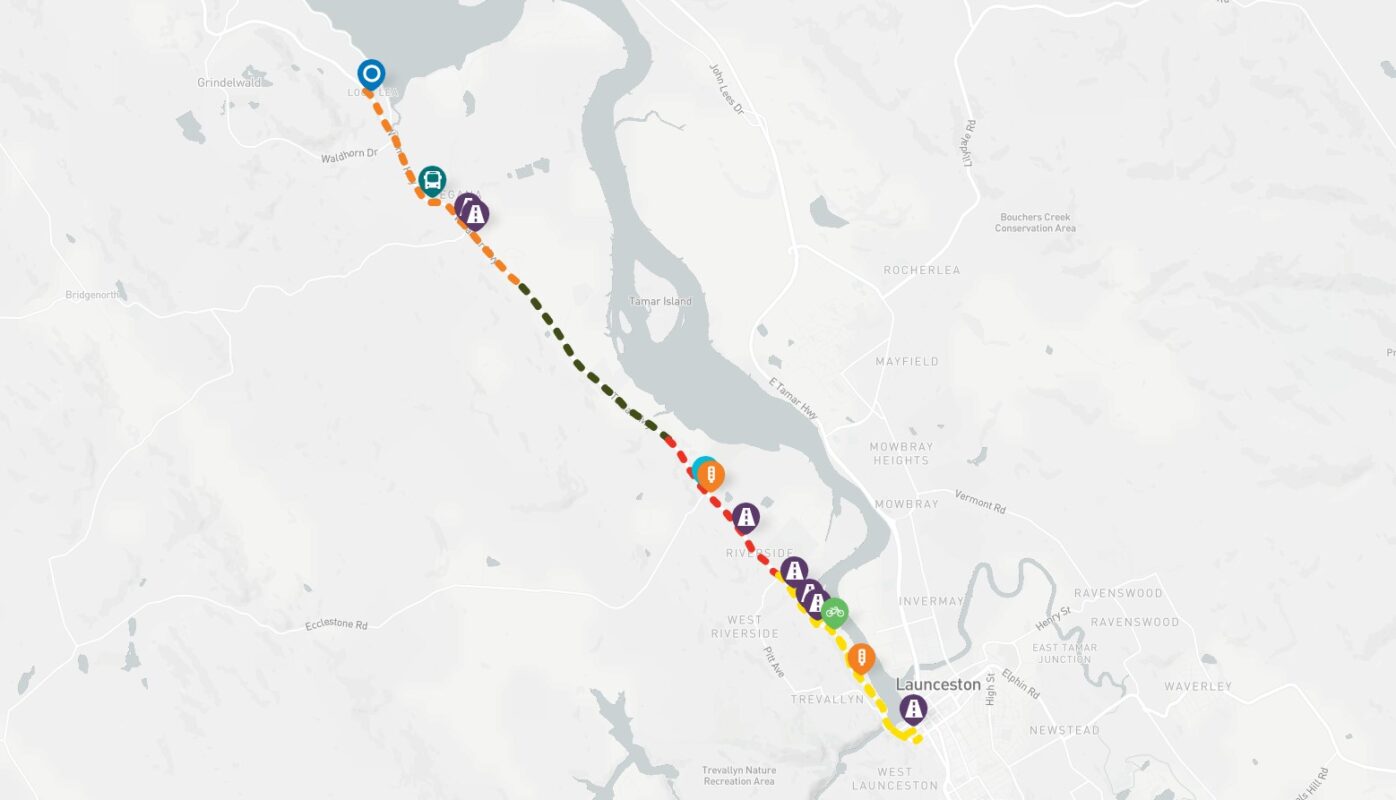 While work has already been done on the West Tamar Highway to widen some shoulders for confident road cyclists, there is still work to be done to build an off-road path for the majority of riders.

The corridor study starts in the Launceston city centre and extends to McEwans Road, north of Legana and is looking at improving safety, connectivity and travel time reliability for all types of transport.

This is another study where the government is asking you to put your comments on an online map by 18 August: https://stategrowthtas.mysocialpinpoint.com/west-tamar-highway-improvement-opportunities#/

All ideas are on the table, including reviewing speed limits and bus routes and stops.

While improving facilities for cycling is mentioned, the study is focused on road cyclists rather than catering to the majority of riders who would prefer an off-road path/lane separated from moving traffic.

There is currently and off-road path from the city centre to Tailrace Park. The planning study should look at where there is land in the corridor, already owned by the crown or can be acquired nearby to extend the off-road corridor to Legana, especially connecting to all the schools along the way.

This route could be a mix of off-road path, widening paths on existing quiet roads, some sections of separated on-road path, new path on acquired land and widening or sealing existing paths in the highway corridor. It’s defining a cycling corridor that can be developed in sections to ensure more people north of Launceston have the choice of riding for transport.