Victoria Police are being asked to use common sense during their upcoming patrol of Southbank Promenade in Melbourne.

Operation River Run will be in operation during February and March, with police keeping an eye on bike rider speeds. They will be using hand-held speed guns and have even talked about possible fines of $1,652.20 for anyone caught riding too fast.

There are signs dotted around Southbank Promenade advising people to travel at no more than 10km/h, but these are usually not needed because the number of people on Southbank make it difficult to ride much faster than that.

While foot traffic might be down on Southbank at the moment, a visit by Bicycle Network today showed it hasn't turned into a bike free for all and that the hordes of pedestrians have been replaced with outdoor dining setups.

Bicycle Network CEO Craig Richards said that the best approach for police to take is to chat with anyone clocked riding too fast.

“There are rarely incidents between people riding and people walking at Southbank Promenade. The timing of this blitz is hard to understand as it’s still very quiet there.”

“It would be great if the police took the opportunity to educate anyone riding too quickly rather than handing out excessive fines. Particularly when most people on bikes don’t have a speedo to know how fast they’re travelling.”

“A fine of $1,652 is extraordinary. It’s more than three times the amount of some drink driving fines.”

“Our advice to people riding on Southbank Promenade is to ride at about the pace someone can run and be able to stop immediately if you need to.”

If you do receive a fine from police for riding too fast at Southank, Bicycle Network would be keen to hear from you. Bicycle Network members can receive legal support and a consultation with Maurice Blackburn law firm at no charge. 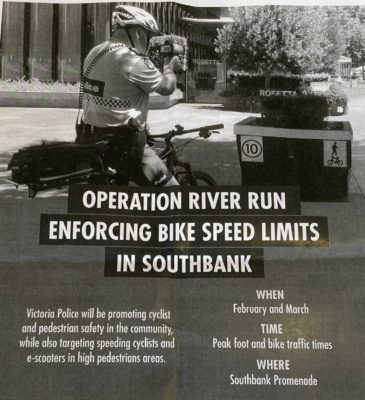 A flyer by police advising they will be out on Operation River Run. The operation will be run by Melbourne Bike Patrol and Southbank police. Escooters will also be targeted, as will illegal ebikes that use throttle grips, have power assistance at more than 25km/h or have a maximum power of above 250 watts.

“We know more people are choosing options such as electric bikes and scooters to get around the city, and we want to make sure their devices are up to standard and in line with current regulations," said Southbank Acting Senior Sergeant Brett Sidebottom.

“We encourage all users of roads and shared footpaths to have patience and make sure you look out for each other to ensure everyone is using the space safely.”