Back in 1973, Professor S. S. Wilson published a study in the Scientific American magazine that measured the efficiency of locomotion for various species and machines on the planet — and humans came first.

Well, that is not entirely true.

Unaided humans actually ranked around mid-tier. It was with the help of the humble bicycle that humans shot to the lead.

“When one compares the energy consumed in moving a certain distance as a function of body weight for a variety of animals and machines, one finds that an unaided walking man does fairly well (consuming about .75 calorie per gram per kilometer), but he is not as efficient as a horse, a salmon or a jet transport. With the aid of a bicycle, however, the man’s energy consumption for a given distance is reduced to about a fifth (roughly .15 calorie per gram per kilometer).

Therefore, apart from increasing his unaided speed by a factor of three or four, the cyclist improves his efficiency rating to No. 1 among moving creatures and machines.” 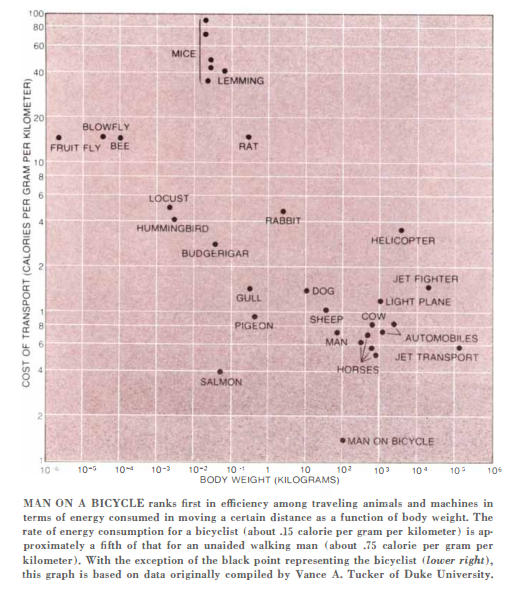 While its difficult for us to understand the science behind the complex study, one of the most brilliant minds of our time would surely get it. And it turns out the late, great, Steve Jobs actually really enjoyed talking about it!

While there are differing opinions about the brilliance of Steve Jobs, his analogy of the computer being "the equivalent of a bicycle for our minds” is no doubt a powerful endorsement for bikes from the co-founder of Apple.

S. S. Wilson's study was published amidst the "bicycle boom" in the United States, when "entering a bike shop was like going into a bank: you had to wait patiently in line."

“The nation faces a serious bicycle shortage,” warned Time in the summer of 1971.

“I can sell every bike I can get my hands on,” an LA bike dealer told Time.

And in a statement that would have landed him a job at Bicycle Network, Wilson wrote in his study:

“For those of us in the overdeveloped world the bicycle offers a real alternative to the automobile, if we are prepared to recognize and grasp the opportunities by planning our living and working environment in such a way as to induce the use of these humane machines.

The possible inducements are many: cycleways to reduce the danger to cyclists of automobile traffic, bicycle parking stations, facilities for the transportation of bicycles by rail and bus, and public bicycles for “park and pedal” service. Already bicycling is often the best way to get around quickly in city centers.

If one were to give a short prescription for dealing rationally with the world’s problems of development, transportation, health and the efficient use of resources, one could do worse than the simple formula: Cycle and recycle.”

But Wilson's words were not heeded. The bike boom in America and around the world collapsed a few years later as cycling fell out of fashion, protesters switched their focus from pollution to anti-nuclear campaigns and saving whales, and cities continued to be built for automobiles.

You can read more about the rise and fall of bike culture in the United States in this brilliant article.

Now, amidst another global bike boom in the wake of the COVID-19 pandemic, we're sharing stories like this in the hope that governments around the world will learn from the past and capitalise on this opportunity to implement sustainable changes to our city planning.