A new bridge over Brooker Avenue has opened after a lengthy delay to create an easier link for people walking and riding between the Queens Domain and Hobart’s city centre.

Better connections between the Domain and city were recommended by Danish architect Jan Gehl in his 2010 report on improving Hobart’s public spaces. That led to the 2013 Inspiring Place landscape architects’ master plan for the Domain which recommended a bridge from the TAFE building on Bathurst Street to the university buildings on the Domain.

The new Rose Garden Bridge begins on Bathurst Street just down from the corner with Campbell Street, hugs the Menzies Institute building and crosses Brooker Avenue to land at the corner of the Rose Garden and University of Tasmania’s nursing school.

It’s been close to two years since construction started and more than a year since the main span of the bridges was lowered into place in February 2019, with a defective non-slip coating on the pathway holding up the opening for more than six months. 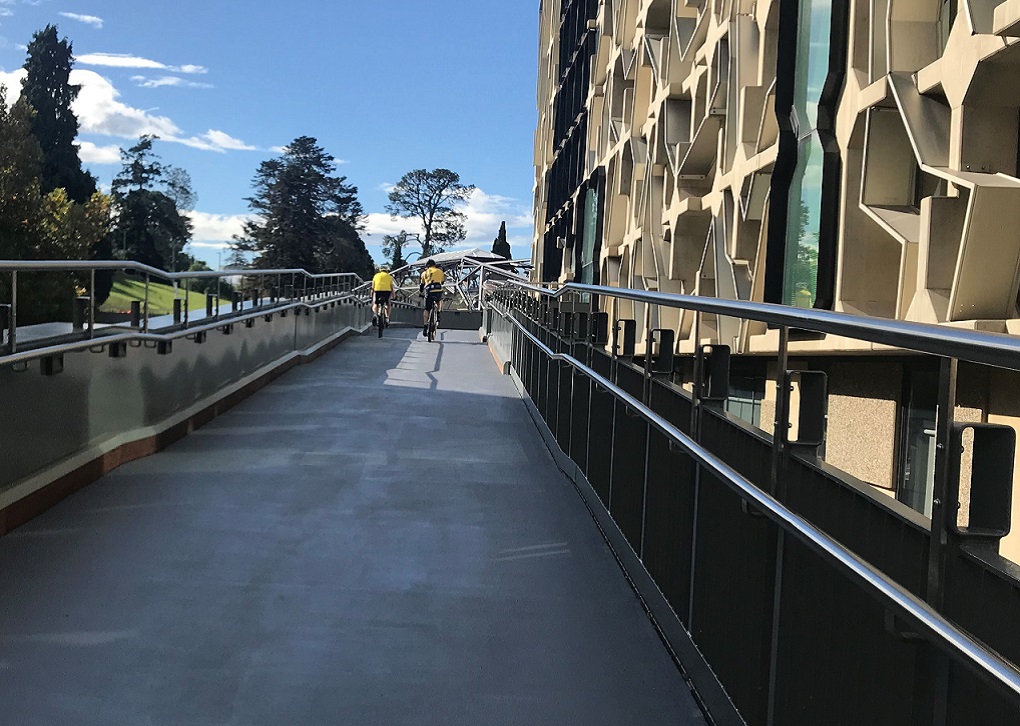 If people wanted to cross Brooker Avenue at this point, they previously used the at grade pedestrian crossing which had a long wait for the lights to change and was too short for some people to cross six traffic lanes and median. They could also use the underpass at the Railway Roundabout which required getting off bicycles and wheeling them down/up a narrow ramp alongside a steep set of stairs.

The new bridge is a big improvement as it doesn’t require any wait or dismounting, however, it’s not well designed by bicycles in a few places.

The right-angle corner at the city end of the bridge is narrow and will require bicycles to slow substantially to get around it without contacting other users.

The kerb ramp which leads up to the bridge on Bathurst Street is nice and wide but has a dangerously high lip for bicycles which will be approaching at an angle. If rider don’t cross this at right angles there is a chance they might come off their bikes, we’d expect the City of Hobart to grind this down to a safer level.

Getting onto the bridge on the Domain side is easy, with a wide pathway leading up to the bridge through the Rose Garden. There is no signage to the bridge, but we expect that to be installed as part of the upcoming City to Gardens Way project.

But on the city side it is not obvious where bicycle riders are supposed to go to get onto the bridge or where they go when they come off it.

This should be resolved when the City installs its separated cycleways on Campbell, Bathurst and Liverpool streets, although a bi-directional or contra-flow lane on Bathurst Street may be something that needs to be implemented to make it truly useable.

The bridge means it is now easy to ride from the Intercity Cycleway to Campbell Street separated from traffic, but the City of Hobart still needs to implement better signage and other visual clues to guide people riding.

The City to Gardens Way project involves improving the wayfinding signage between the city and Domain, and that should be extended down to the cycleway. Consultation on this finished in early April so hopefully it will be rolled out soon.

Sign up to an annual membership today to get 18 months cover for the price of 12.

Sign up for an annual membership today and score a Knog light set valued at $49!

Sign up the whole family for the price of an individual membership.