The motor car industry has been making rapid progress with technology that reduces the risk of bikes striking suddenly opened car doors.

Mostly the developments have comprised a combination of sensors and driver warnings to alert those inside the car of an approaching bike outside.

But the development we have been waiting for was the next step: a system that would actually prevent the door from being opened wide when a bike approach was imminent.

Now, Ford has announced that it has developed such a device and it is in testing.

"We have now developed a technology that could one day make it easier to avoid dooring accidents with vulnerable road-users that also include motorcyclists,” Ford engineer Friederike Philipsenburg said.

"Following initial internal testing with drivers and cyclists, engineers will be conducting customer clinics in the coming months.

"Part of the testing will be to ensure that the technology accommodates road users in different markets, taking into account right- and left-hand drive vehicles as well as different road and lane layouts.”

Fords system uses its previously developed Exit Warning technology to provide visual and audible alerts to road users and vehicle occupants when it detects that opening the door of a parked car might cause a collision.

Philipsenburg said Ford vehicles already feature sensors and technology that can automatically detect and brake for cyclists, and help drivers to know when other road users are passing by their blind spots.

Using these existing sensors, Exit Warning analyses and understands the movements of approaching road users – whether they are riding a bicycle or an e-scooter – on both the driver and passenger sides of the vehicle.

If the system detects that opening the vehicle door could cause a collision, an alarm sounds to warn the driver or passenger of the danger.

Bright red LEDs on the wing mirror begin to flash as a visual warning for cyclists and a strip of red LEDs along the inner trim of the door – that becomes visible when the door is opened – provides further warning for passing road users.

Now, with the addition of the new mechanism, the car door is momentarily prevented from fully opening until the Exit Warning system determines the passing road user is safely clear of the vehicle.

The vehicle occupant will be able to manually override this feature in an emergency. 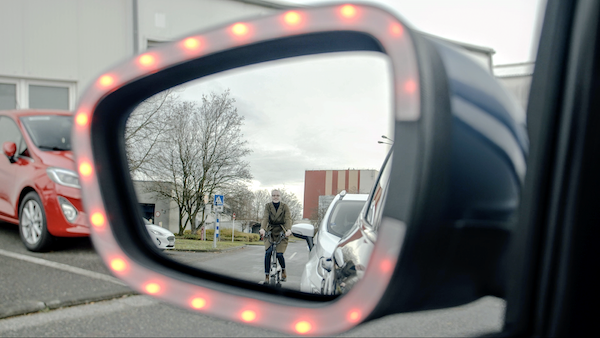