Away from the beaten tourist-track, Sulawesi offers mountainous terrain, lush foliage and all the ingredients for an amazing cycling trip. Colin Freestone shares his experiences gained from 15 years exploring the island.

Sulawesi, that spidery, mountainous Indonesian island just north of Bali, is superb for cycling. It’s way off the beaten tourist tracks of Bali and Java and the terrain is forever changing from serene rice plains to majestic mountains to restful palm fringed coasts. Western commercialism has not yet reached the island. Western tourists—who are few and far between—stick mostly to the island’s world-class dive resorts. Western tourists on bikes are rarities.

Four centuries ago, Sulawesi was a magnet for European fleets that braved the 24,000km sailing around the Cape of Good Hope in search of the then-fabled spice islands. Portuguese and Dutch sailors wrestled with unknown weather patterns, sketchy maps, disease and sickness and unfriendly local sultanates in their quest to control the lucrative spice trade, with a kilo of cloves fetching more than its weight in gold. Relics of this era are found in the form of forts in Makassar and Gorontalo. And from this period, Indonesian words found their way into English. Words like ‘bogeyman’ from the Bugis ethnic group, and ‘antimacassar’ from the cloth used on the backs of chairs to protect them from Makassar hair oil. Today the cloves, nutmeg, cinnamon and pepper of the former spice islands are grown in Sulawesi, along with coffee, chocolate, tea, copra and palm oil.

The fact that Sulawesi is not part of mainstream Indonesian commerce makes it attractive to cyclists seeking quiet back routes. In contrast to densely populated countries such as Vietnam and Thailand, much of Sulawesi is thinly populated with consequent low traffic volumes. Makassar and Manado are the only two centres that could be called ‘cities’. Foreigners are few and far between in Sulawesi. Those on bikes are such rarities that when you pass through villages, kids and grandparents alike will run out of their houses to get a look at the lycra-clad out of space wonders. 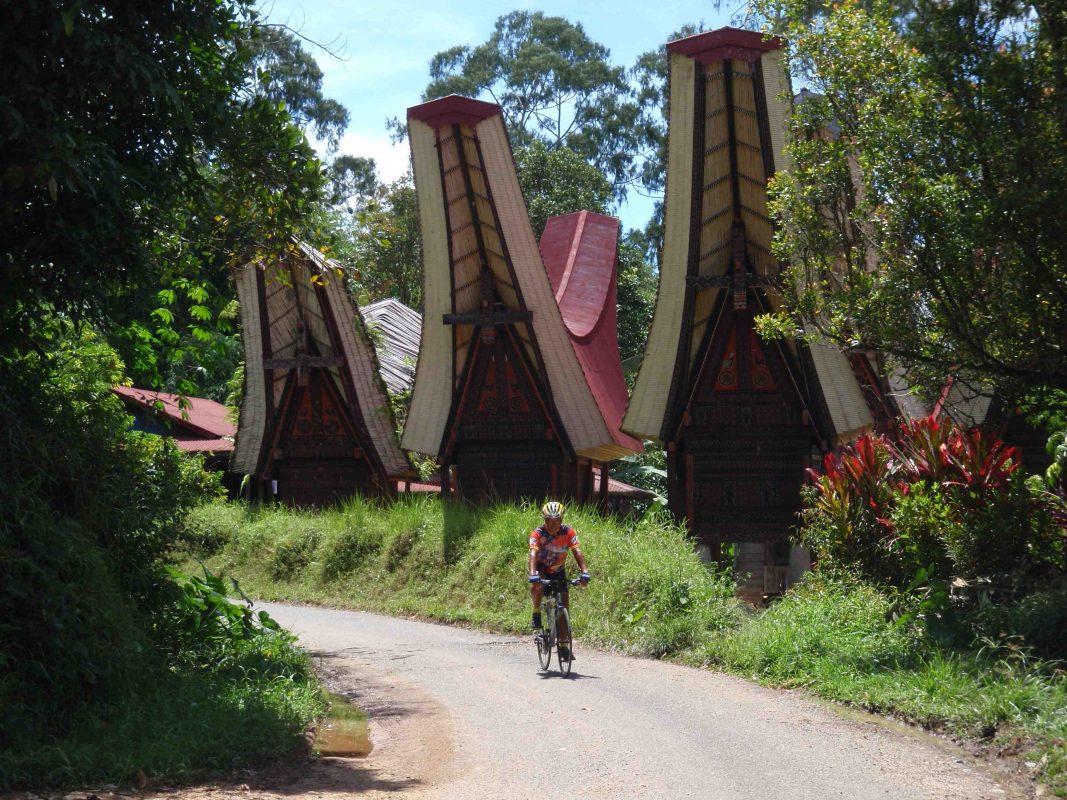 People in Sulawesi are incredibly friendly, forever greeting riders with ‘hallo mister’ or ‘I love you’. They will wave you down, invite you into their homes, offer you coconut water or sugar palm lemonade, mangoes, rambutans, durian, salak and half a dozen different types of banana—not to mention delicious village cakes made from sticky rice or cassava flour, palm sugar and coconut flesh, often cooked and wrapped in banana leaves.

Indonesia is still on the Australian Government’s travel warning list and I’m often asked about safety issues. In the 15 years I’ve been coming to Sulawesi I’ve never experienced either aggression directed towards me or observed it among locals. I was told not to go to Central Sulawesi because there’d been some problems there in the early 2000s. To see for myself I went there, and Muslims, Christians and Hindus alike said the same thing—‘religious disharmony is a thing of the past’.

Sulawesi is like Malaysia in the mid ‘60s. Family and religion are the moral bulwarks of society. There is very little commercial tourism. There are very few American food outlets. Much work is done manually. The cash economy dominates with credit cards and travellers’ cheques being of little use (but ATMs abound). Most villagers have not travelled much beyond their birthplace, giving people an old world charm. They’re intensely interested in outsiders. ‘Are you married?’ ‘How many children do you have?’ ‘What religion are you?’ Sulawesians are not backwards in asking about things Westerners consider ‘private’. And they’re pleased if you’re as inquisitive as they are. Friendliness of the people extends to drivers too. They’re thoughtful, courteous and helpful to international cyclists.

Religious harmony between the two major religious groups (Muslims and Christians) is the norm and nowhere is it seen better than in Toraja Land where inter-marriage is common and where the dictates of Islam and Christianity have been sensitively interwoven with the animistic traditions of the Torajan people. At Torajan funerals, where the gift of animals is critical for the success of the event, Muslims will make gifts of pigs to Christians with the animals being handled by Christian family members, and in return there’ll always be meat other than pork for the Muslims to eat.

For cycling purposes, Sulawesi can be divided into North, Central, South and Toraja Land. All of these regions are mountainous and provide splendid scenery. They’re all serviced by provincial roads which are mostly in reasonable condition, with some parts being in a state of repair/disrepair, usually as a result of landslides. Village roads, being cobbled, are generally pretty rough and one needs off-road experience to enjoy them. 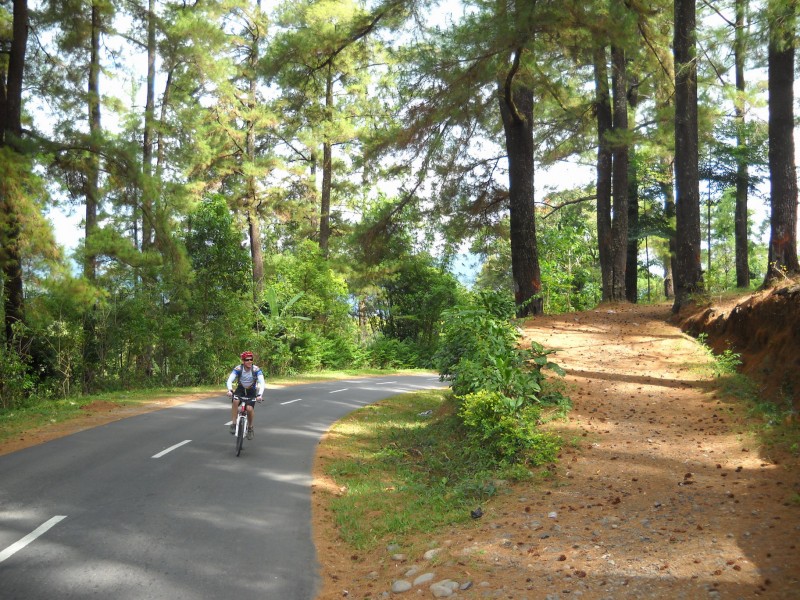 Each region has its own characteristics. In South Sulawesi, one can enjoy tea plantations, pine forests and numerous waterfalls, the wooden sailing boat building industry, white sand beaches, paradisiacal tropical islands, silk weaving and floating villages, a living museum, thermal pools and salt making. Makassar, the main city in South Sulawesi, can be reached by direct flight from Jakarta, Singapore and Bali.

In Toraja Land, you can enjoy truly magnificent rice-terraced mountains and valleys where traditional villages nestle with the prows of their boat shaped houses, and church spires stretch to the sky. Here, apart from the cycling, you can do some mountain trekking and white water rafting or explore the distinctive animistic culture of the Torajan people, where the funeral ceremony is central to the fabric of the society. In Toraja, people who die are embalmed and ‘looked after’ at home until such time as the family can afford the funeral, usually months or even years later. Visitors are often introduced to these dead ancestors. Funerals are huge social occasions where temporary shelters—that last for years—are built, ritual donations of water buffaloes and pigs are made, and traditional entertainment is provided. Quite often the proceedings will go on for several days with thousands of people attending. Tourists are welcome. All they need do is wear a ritual sarong and make a gift—perhaps a case of beer, a carton of cigarettes or a sack of sugar. For these occasions the locals dress up in their best and the ambience is festive. Although Toraja is a destination for international visitors, tourist developments are tasteful and blended with the local culture in a symbiotic way. Access to Toraja from Makassar is a day in a bus or a 3-4 day bike ride.

Central Sulawesi offers fabulous cycling opportunities. The roads are generally good and the scenery is spectacular: either in the mountains, along the lake shores or following the coconut palm fringed coast. When cycling in Central Sulawesi you’re never far from water and in contrast with much of South East Asia, the water is clean and crystal clear. Waterfalls abound too. Central Sulawesi is blessed with world class diving at Palu and Togian. Central Sulawesi can be accessed by plane from Makassar to Palu.

North Sulawesi provides some first class cycling opportunities. The road from Manado to Gorontalo is in good shape and the traffic is mostly light. Just outside of Manado, on a side route to Gorontalo, there’s an active volcano, thermal pools and an intensively farmed lake. The road that cyclists would take from Manado to Gorontalo runs along the coconut palm fringed north coast. It is mountainous and sparsely populated. A most scenic deviation is via Kotamubago with its rich upland agricultural valleys where European type vegetables, such as cauliflower, are grown along with coffee. At both ends of the Manado – Gorontalo route there are dive resorts. There are direct flights to Manado from Jakarta and Singapore.

For cyclists, good food is mandatory. Wherever you are in Sulawesi the main menu is rice, grilled fish or fried chicken, fresh salad vegetables and vegetable broth. Fruits and village cakes can be bought at village markets and roadside stalls. Bottled water is available most everywhere. Icy cold beer is obtainable most places. Dairy products are scarce. Most people return home from cycling in Sulawesi a few kilos lighter and feeling fitter than when they left home.

Another unfounded concern some might have is the accommodation. In major centres, there are modern international class hotels with swimming pools, swish bathrooms, express laundry and lavish buffet breakfasts. In Toraja Land, there’s a good range of quality accommodation, some of it in Torajan style but with modern plumbing and air conditioning. At the dive resorts there are comfortable wood ’n thatch beach cottages. 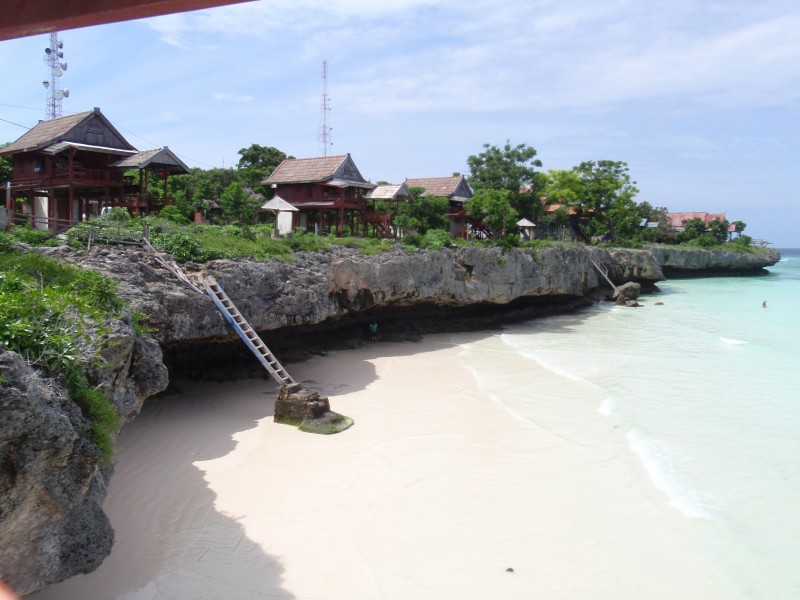 Outside of the main urban centres and dive resorts there are family run guesthouses called wismas which are usually big houses that have been converted into commercial accommodation. They’re typically run by an ‘ibu’ assisted by a coterie of youngish nieces and nephews who are there because they’re family. These wismas usually have rooms which boast AC, hot water, sit down flush toilets and an Indonesian breakfast (usually) of fried rice, coffee or tea.

People thinking about cycling in Sulawesi are often worried by the heat. The reality is that Sulawesi is on the equator, so compared with Europe and North America, it is hot. However, if one gets underway at dawn, takes frequent drink breaks in shady spots with an extended stop in the middle of the day, the heat is not a problem for riders who’ve prepared themselves for the trip.

Colin Freestone, a bilingual and bicultural Australian with a view to developing cycle routes, has been exploring Sulawesi with his son Rendra since 2000. His company, Cycle Sulawesi, has been running trips to all the regions of Sulawesi since 2009.

This article first appeared in the spring 2016 edition of Bicycle Network's former magazine, Ride On.

While Ride On is no longer produced, we can still publish your riding stories. Please contact us and send us your stories.