Share bikes are back in business in Melbourne with 400 of Uber's electric Jump bikes hitting the pavement.

Uber recently signed a deal with Melbourne, Yarra and Port Phillip councils which allows the bikes to operate and includes a set of ground rules that should avoid the troubles of previous bike share schemes.

There has been much discussion about how the scheme will work following the recent closure of the Melbourne blue bikes, and the ill-fated oBikes.

Uber has learnt from the mistakes of these previous operators, and the bicycles themselves have some sensible features that should make them a hit with tourists and allow for some Melburnians to ditch their next Uber trip for a bike trip (by Uber).

To use the bikes you need to open the Uber application and switch on the home screen to view available bikes. You then use your app to scan the QR code on the handlebars to unlock the bike. Bikes can also be reserved prior to use.

It costs $1 dollar to unlock the bike, and an additional 30 cents per minute of riding, which equated to around $20 per hour. This may seem expensive on face value, but the bicycles are designed for short trips.

During peak times it may end up being cheaper to use a bike rather than sit in traffic. For our test we rented the bikes, road through the city for a few kilometres and parked it out the front of our destination, for the price of $2.70. 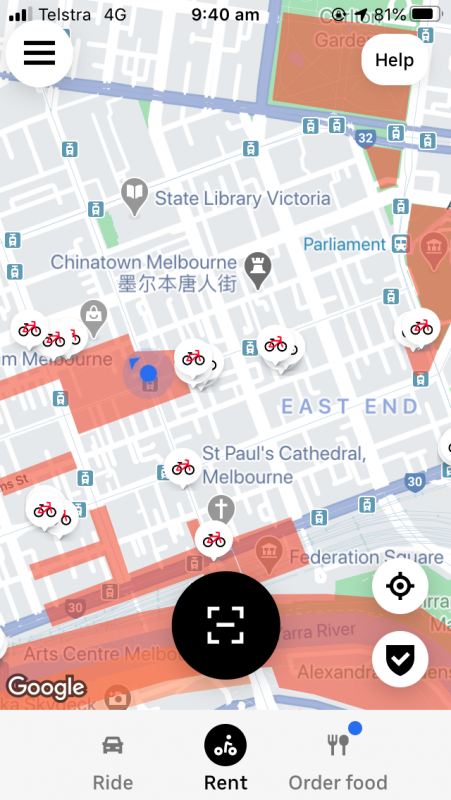 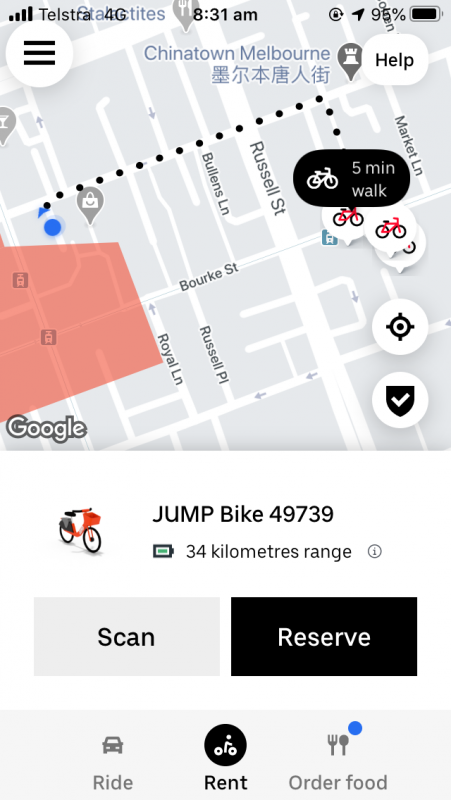 What lessons have been learnt

For starters, Jump bikes are better placed to not to be vandalised due to the accountability of the system, as it's connected to your Uber account.

Secondly, while the bikes are dockless, they have the ability to lock the bike using the cable lock provided to a hoop or rail. This will prevent bicycles from being moved when not in use. The bikes are also really heavy, making them harder to move when not in use.

Provided users are courteous when locking the bicycles, there should be less bikes littered on footpaths (and in the river).

Cooperating councils have also enabled geo-fencing (the red in the photos above) to warn riders where they shouldn't park bikes. This includes a 50 metre zone around the bodies of water in Melbourne, preventing late night misadventures involving bicycles and the Yarra. If users park bicycles where the shouldn’t a $15 fine will apply.

The bikes are also GPS tracked to ensure they remain within their boundaries and are monitored by the operators.

As the Jump bikes are dockless and allowed to be ridden across various councils, it is likely that they will be used more than their predecessor blue bikes.

How do the bikes ride

The bike rides surprising well for an electric share bike. The handling is predicable, and the bike feels very sturdy (compared to an oBike which felt like it could fold in half underneath you).

When riding you don’t notice the extra weight of the bicycle along the flats. This is due to the front hub electric motor which has a reasonable amount of pickup and engages quickly when pedalling.

You can reach the top speed of 25km/h very comfortably and should be able to cruise a reasonable speed without breaking a sweat.

The large front basket is big enough for a bag, and the bikes have a nifty phone mount which should assist in way-finding for tourists.

As noted by other commentators, there are still a number of concerns around whether the scheme will be adopted by Melburnians.

Both Uber and the councils involved are monitoring the roll out and will likely respond to challenges as they arrive, which will hopefully help guarantee a positive experience for everyone.

Ultimately we will have to wait and see how the bicycles are received by the public.

At Bicycle Network we think that more bikes on the road is always a good idea, and if these bikes can replace less-healthy car trips, even better. The share biking scheme has grown up along way since oBikes, lets hope Melbourne has as well.