A popular cycling bridge over Victoria Road near The Crescent intersection in Sydney's inner west has been shut down for construction of the WestConnex motorway — and once again, riders have drawn the short straw with the proposed detour.

The alternative route proposed by the government diverts bike riders from Lilyfield Road along the steep, narrow Gordon Street in Rozelle and across a double intersection on the City West Link, which Bike Leichhardt vice president Bob Moore labelled a "recipe for conflict".

"The wait on the central island is terrifying, with heavy traffic hurtling past," says Moore.

On top of terrifying crossings, Gordon Street is busy, steep and narrow — a killer combination that is not at all suited for bike and car cooperation. There are genuine concerns this will exacerbate tensions between motorists and cyclists and potentially put lives at risk. 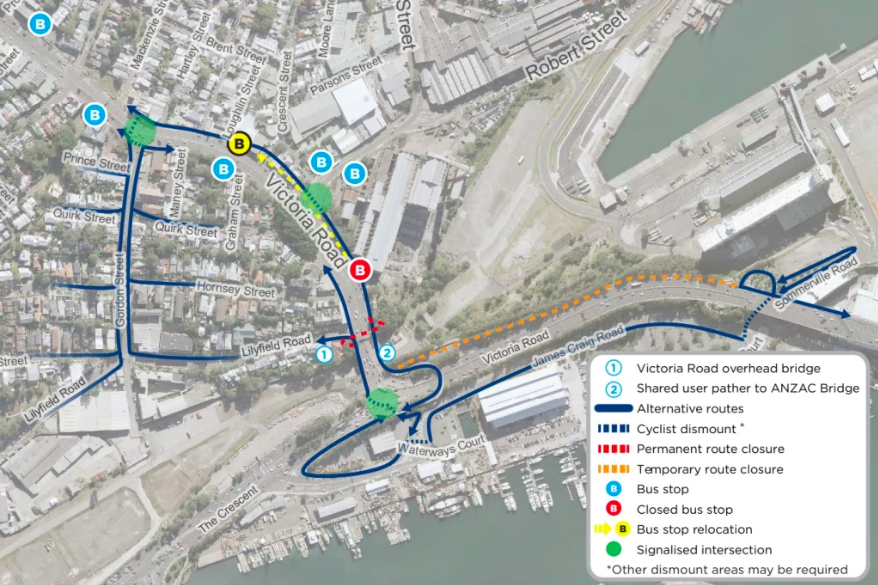 The government released its alternative cycling and pedestrian routes for the busy intersection two weeks before sections closed for construction of the WestConnex Rozelle Interchange. CREDIT:NSW GOVERNMENT

The state's transport agency and contractors will also temporarily close a shared bike and pedestrian path that runs from the intersection at Rozelle onto Anzac Bridge, an important link for riders between the inner west and city centre.

More than 100 riders per hour used the Lilyfield Road cycle path during peak hour, making it one of the state's busiest bike routes.

Once the final stages of WestConnex are completed (some time in 2023), riders will be able to travel beneath the busy intersection via an underpass linking the Rozelle Rail Yards and Victoria Road.

For the next six month however, the long-suffering riders of Sydney will be forced to utilise the dodgy detour — adding an estimated 700m to one kilometre to their journey — or find another, much longer route.

A Transport for NSW spokesman said the agency considered a variety of options for the site and that work was under way to improve these routes, including new signs, reduced speed zones, widened paths and pavement markings.

"These were assessed against criteria including safety, compliance, available space within the work site and the potential impact on nearby properties and surrounding roads.

"The chosen detours have been subject to a detailed safety audit, and considered the best outcome."