The latest stage of Queensland’s most ambitious bikeway project proposes a ‘velobridge’, where riders loop out over the water at Lower River Terrace, Kangaroo Point.

Transport and Main Roads Minister Mark Bailey announced this latest plan for the State Government’s Veloway 1 (V1) earlier this month as “complementing the $45 million Veloway Stage E at Tarragindi”, but it hasn’t been supported by everyone. 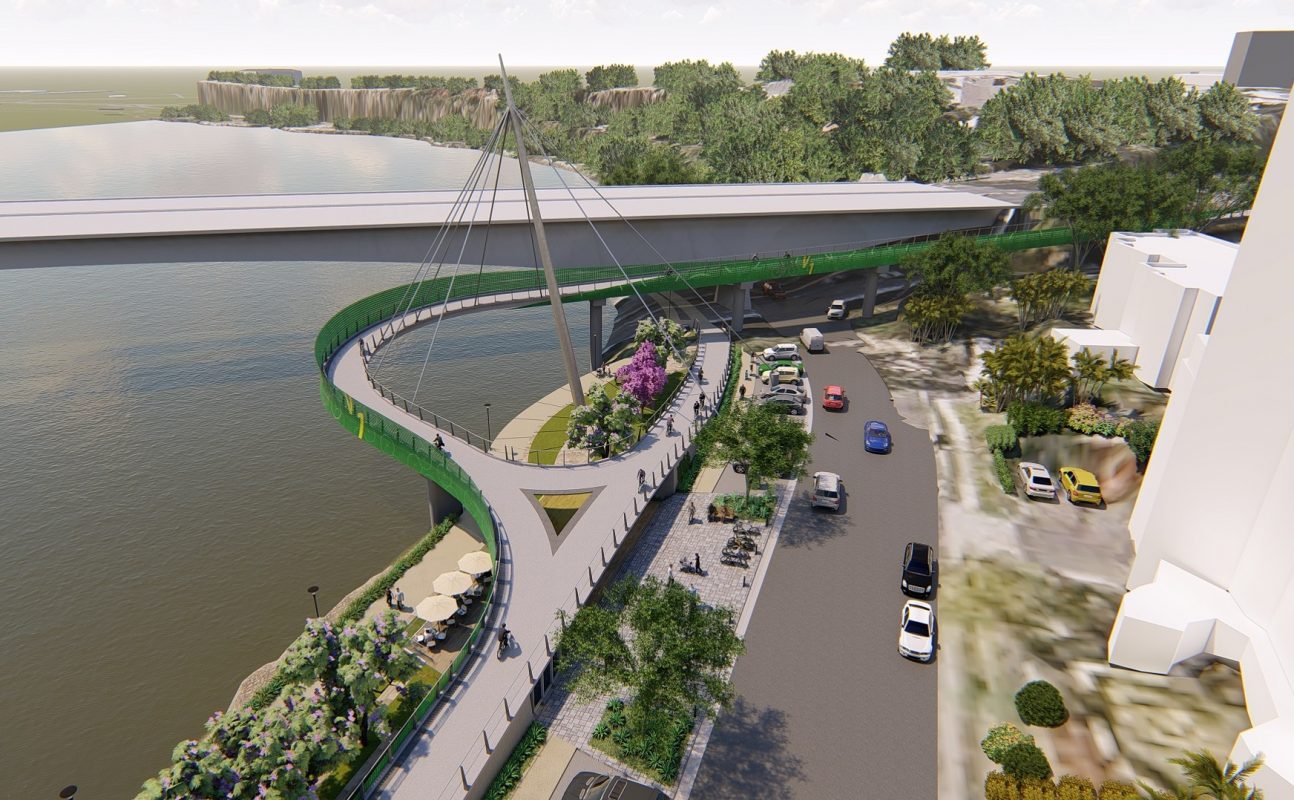 An artist impression of the proposed velobridge.

Greens Councillor Jonathan Sri said that while generally he supports bikeways, in this case it would be a far simpler, cheaper and faster fix to close Lower River Terrace to car through traffic just before the intersection with the road leading up to Ellis Street.

“The people who are getting excited about this proposal need to remember that it could be years before this is built, but if the Government signals it is going to go ahead with this, we are unlikely to get any further interim upgrades to improve safety in the meantime,’’ he said.

“It will undoubtedly have some pretty significant impacts on all modes of traffic, and nearby residents, during the construction phase.

“So a decision to push ahead with the project shouldn’t be made lightly, particularly when there are lots of other cycling blackspots that also urgently need funding.’’

This comes after Stages 1A-C of the $7 million Kangaroo Point Bikeway upset local unit owners after trees were cut down and scarce on-street parking spaces removed on Little Dock St.

Public consultation on the velobridge is now open in the form of an online survey.

South Bank Corporation Chief Executive Officer, Bill Delves added his caution that they have not yet endorsed the plan.

“The plans must adequately consider the safety of pedestrians, cyclists and vehicles — all of which access that area — in addition to meeting South Bank’s high standards,” he said at the time.

However the State Government, who committed about 1.6 million towards the planning of the velobridge, are backing their plans, saying it would address the problem of a steep climb for cyclists from the river level and would mean riders would not have to cross the road to access the Veloway.

Bicycle Queensland threw their support behind the plan as a win-win for everyone.

“If we flatten out this first section of the V1, it will make this trip by bicycle more attractive to riders of all ages and abilities,” Bicycle Queensland spokesperson Andrew Demack said.

“If more people can use this vital bikeway, it will reduce congestion in other parts of South Brisbane’s transport network.

The current Stage E is expected to be completed by mid-2020, when a business case for the bridge is also due for public release.

The community and stakeholders are invited to have their say on a proposed Velobridge at Lower River Terrace, South Brisbane to connect the Kangaroo Point Bikeway to the existing Veloway 1 infrastructure via the link below.