Neil Baird-Watson wrote down notes after each day of riding from Robe to Torquay – here is his diary of the 2019 Great Vic Bike Ride.

Albert Einstein is widely credited with saying “the definition of insanity is doing the same thing over and over again, but expecting different results”... and so riders in the 35th edition of the Great Vic Bike Ride wheel their way to the start in Robe, South Australia.

I’m slightly concerned about Archie’s comment (now almost 17 years old) that he thinks he’s in A Grade form, but as an old campaigner with 15 prior events under the belt, the old man knows the long game always wins ... well so far, and anyway, it’s not a race!

As for expecting a different result ... we’re hoping for incident free, tail wind assisted riding all the way to Torquay via Port Fairy and the Great Ocean Road.

Lovely countryside, sunny, blue sky and an easy day on the road today, albeit lazing in the back of the bus ... And so starts the 652km ride ... moist conditions and a glistening black ribbon road greeted the 4000 salubrious faces robed up for the downwind spin to Millicent, stopping not at the Sunland Nudist village for an allover tanning session, nor at Lakes Eliza, St Clair or George for a refreshing dip... it’s not Noosa.

A leisurely 79 clicks along the Limestone Coast via picturesque Beachport whose population is a surprisingly cosy 652 and boasting a jetty extending a lengthy 652m into Rivoli Bay. 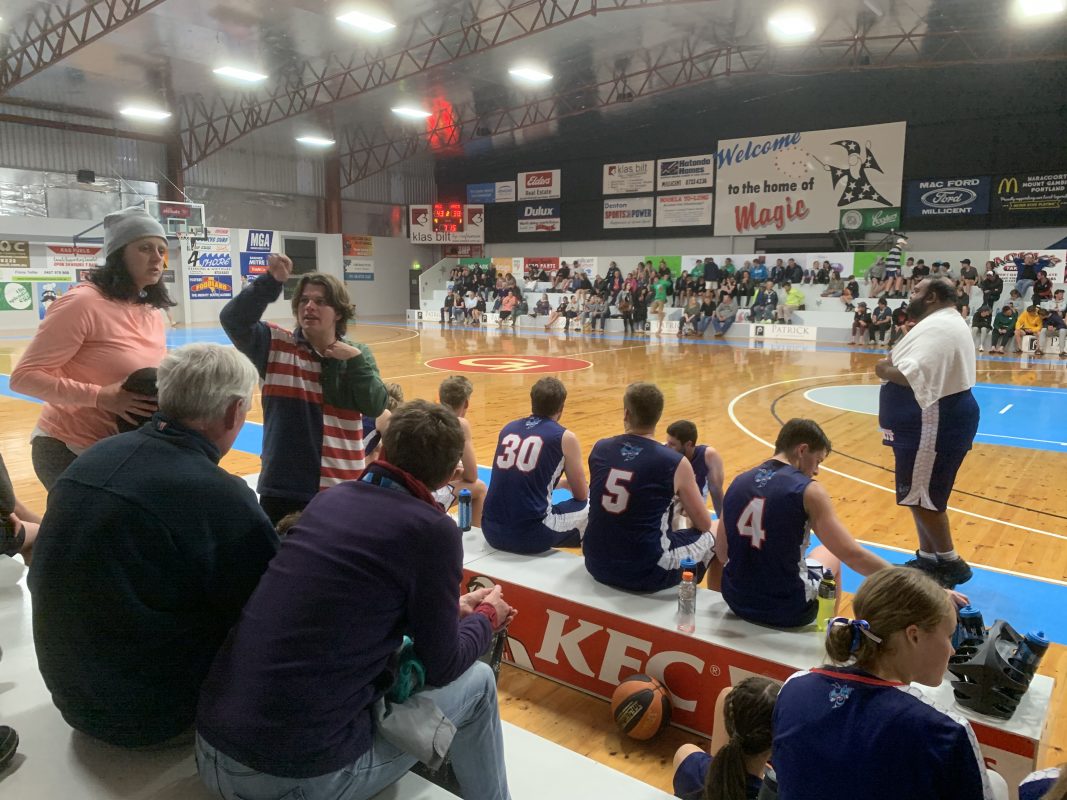 “But if I work all day at the blue sky mine ... and nothing's as precious, as a hole in the ground”

However, today’s ride, having weaved through 88kms of undulating countryside, escorted by lines of wind turbines, stopping briefly at Tatanoola and Kongorong, concluded at the glorious cobalt blue and aptly named Blue Lake. Now that’s a precious hole in the ground!

There'll be food on the table tonight! At 109kms, today was the longest day in the saddle with my A grade companions kept in check as we shadowed the Glenelg River en route to Portland via Donovans and Nelson. With just 85 kms to a rest day in Port Fairy it was always going to be a sprint!

Sucking wheels and conserving energy was my soigneur’s advice ... there’s a good reason why this part of the world is littered with wind generators ... gnarly sections when the road turns windward and a smattering of moist moments accompanied today’s route.

Waterfront views again and the promise of stir fry at the Yellow House thai restaurant beckons. 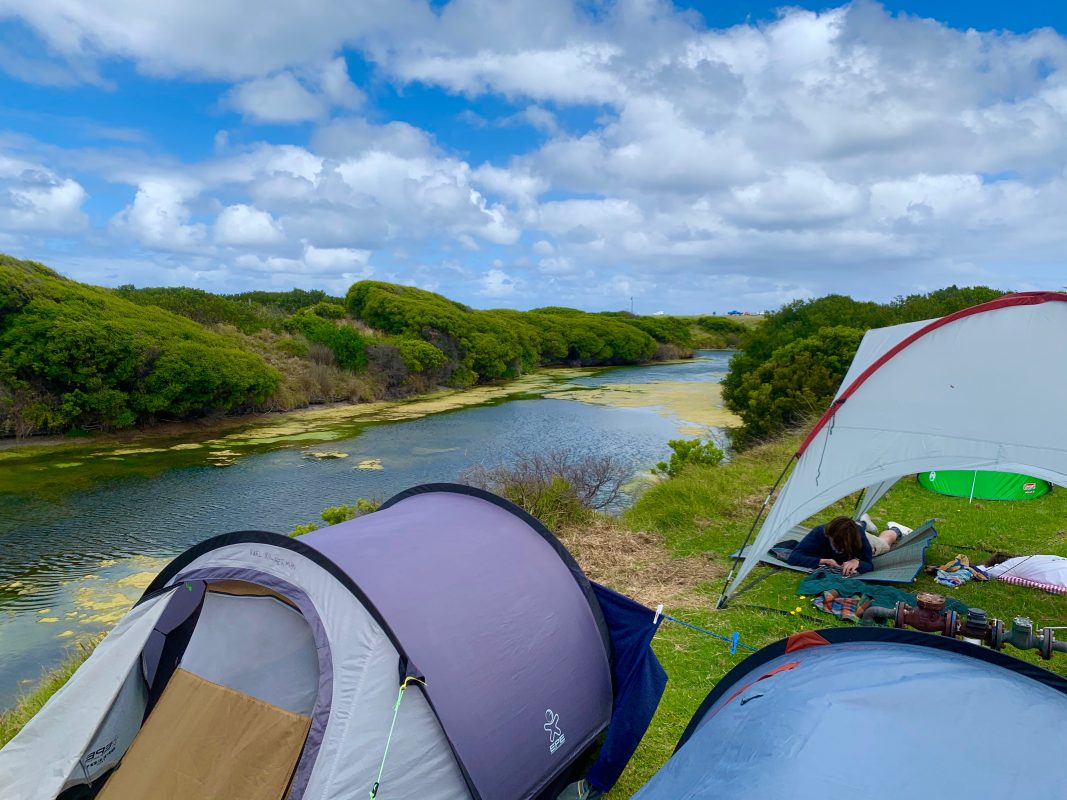 Opting for a Big Breakfast at Rebecca’s in town was a delightful and relaxing start to our rest day, here in what was once Australia’s second largest port, second only to Sydney, circa 1860.

A scenic cruise on the Moyne River and Eastern Bay aboard the “Mulloka” saw the morning disolve into a fish & chip lunch with Red Mountain skier Wayne and his mate at The Wharf ... but alas no whales to be seen (four months too late)!

In a late report a special shout-out to Shelly, a teacher from Albert Park College, that allegedly assisted a lone disoriented koala cross the road on a blind corner yesterday near Narrawong. 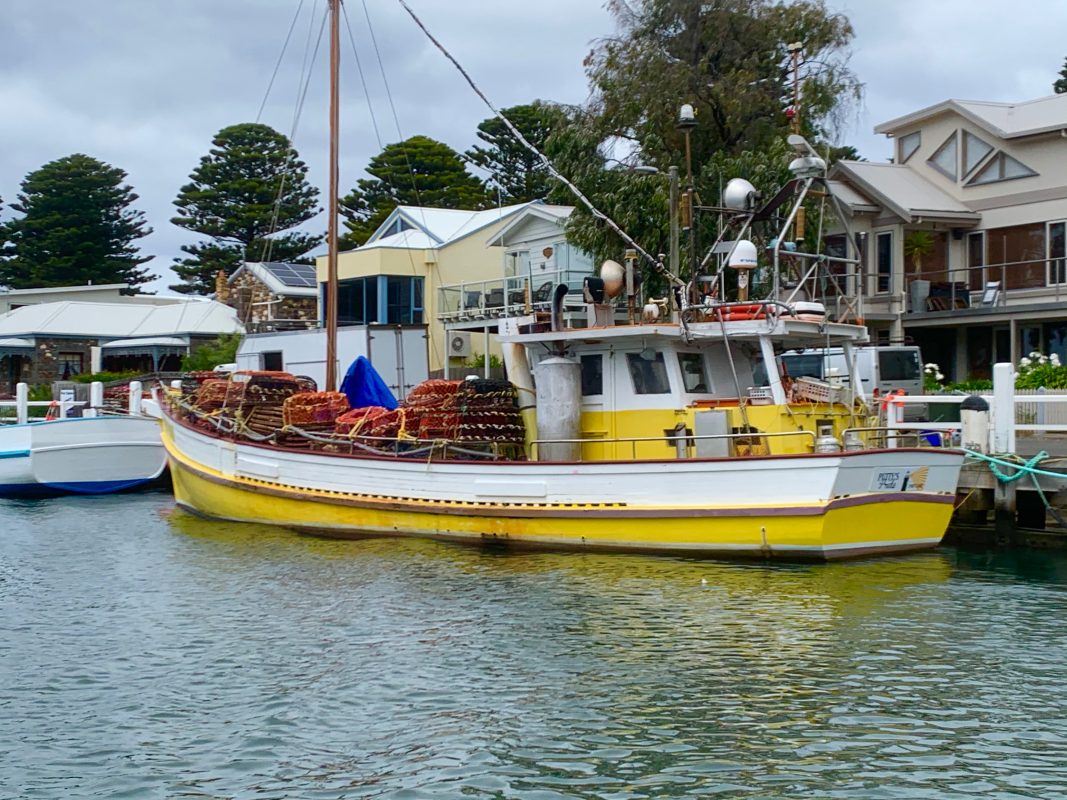 Post script to Port Fairy ... you know your in a quality establishment (pub) as we found ourselves for dinner last night when patrons can (a) stand at the latrine and still be able to watch SkyTV coverage of Greyhounds race 4 at Gunnedah on a monitor imbedded into the toilet wall and (b) the pool table is out of action because all the balls have been stolen! T-bone steak was a winner.

The road to Peterborough, whilst moist at the outset, dried nicely as the Great Ocean Road beckoned ... another wildlife rescue was performed today when a Trent, a teacher from Albert Park College, managed to wake and move two wallabies sleeping in the middle of Rollos Road at Naringal, just as a steaming peloton blasted past. Winding our way past the 12 Apostles and up Lavers Hill, residing for the night deep in the Otways at Beech Forest.

Riding past Weeaproinah, infamously the wettest place in Victoria, grey storm clouds could be seen brewing overhead with the promise of precipitation, Otway Style, overnight and in the morn.

Chips and beer the order of the day. Unfortunately the A grade accomplice  beat me up Lavers Hill by only 10 little short minutes ... The penultimate day on the road saw the Otways live up to its luscious pristine reputation with a magic morning ride weaving through the temperate rainforest along Turtons Track bathed in morning sunshine ... fab.

The final 44kms was the familiar Amy’s Grand Fondo route to Deans Marsh resulting in a delicious local gourmet pie and latte on the lawn.

Last campsite tonight ... on the lookout for a cheeky local pinot noir to celebrate ... home tomorrow! As the sun sets on the 2019 Great Vic, after 10 time shifted days on the open road, damp, tired riders beat a track along the Great Ocean Road from Lorne to the Torquay finish line, copping the odd rain shower and southerly blast as a gentle reminder of the omnipresent elements.

As it transpired, the “long game” rolled over the line having pedalled all 652kms. A grade boy (AKA Archie) may have taken intermediate honours up all the climbs and tucked in for some serious wheelsucking on the flat and downhill segments, but had to succumb to the SAG wagon on the last 75km stage today due to a nagging knee pain that had overtaken the dulling effect of four Voltaren doses.

With Robe to Torquay done and dusted, 2020 looks set to be a much warmer affair, starting in Rainbow (north western Victoria) and celebrating a finish at the Great Western winery, via Horsham, the Grampians and Dunkeld.

PS: we expected the same outcome and weren’t disappointed, so I guess that makes us all sane!

Want to join us in 2020? Get more info and greatvic.com.au and register your interest now and be the first to find out when tickets go on sale.