Bicycle Network is disappointed by the Andrews Labor Government’s decision to increase the age that people in Victoria can ride a bike on the footpath by just one year.

Instead of completely removing footpath riding age restrictions to be in line with other states, the government plans to increase the maximum age from 12 years to 13 years.

“Victoria will continue to be the state with the most draconian footpath riding laws and has missed an opportunity to instantly make bike riding safer for everyone,” said Ms Hargreaves.

Bicycle Network has long campaigned for a complete overhaul of footpath riding laws so that anyone can choose to ride a bike on the footpath when they don’t feel safe on the road.

“Instead of making real change, a lot of time and taxpayer money will be wasted on a miniscule change that still says if you’re a high school student you belong on the road,” added Ms Hargreaves.

“Letting people choose to ride on the footpath isn’t going to turn Bourke Street into a velodrome, it’s about enabling people who work or live on roads like Punt Road, Alexandra Parade or Bell Street to ride a bike.”

“Until we get a proper change to footpath riding laws we will continue to hear stories about people not riding when they want to, or being forced to break the law so they can safely get to school or work.”

In one positive move, footpath riding laws will change to allow anyone over the age of 13 to accompany someone under 13 on the footpath and for parents to ride on the footpath with a child in a carrier.

While Victoria’s roads and bike lanes continue to be underdeveloped, Bicycle Network will continue to push for removal of age restrictions to footpath riding. 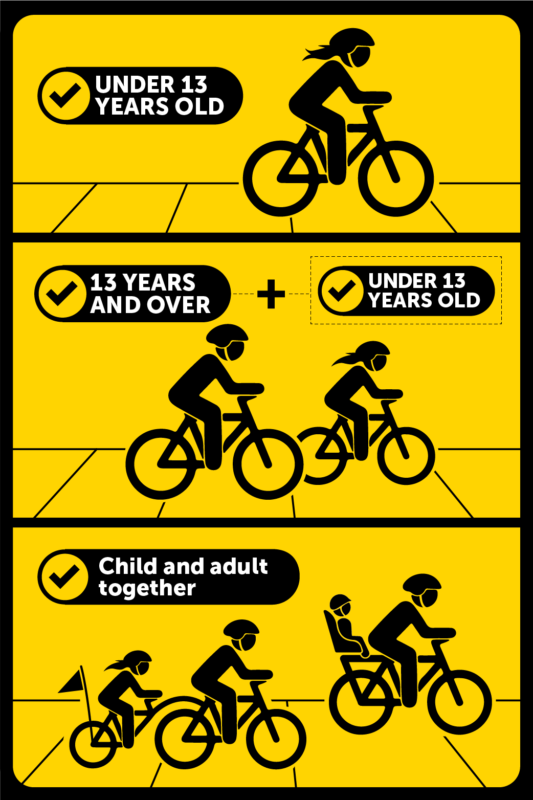 An VicRoads illustration of changes to footpath riding rules.