Community takes bridge into its own hands

After kicking the idea around for years, locals in Dolphin Sands have decided to take on the task of getting a cycling and pedestrian bridge to connect the area with Swansea over the Meredith River.

The Dolphin Sands Ratepayers Association has worked with S Group in Launceston to come up with a design for the bridge and now needs to get other reports necessary for a development application.

To help fund their bid they are holding a raffle and BBQ on Saturday 2 November, 4–7 pm, at the corner of Dolphin Sands Road and Cambria Drive.

Once they have a development application approved they will apply for state and federal funding to have it built.

Residents currently have to take a 7–8 km trip to get to Swansea, with the road very busy in peak periods and not comfortable for a lot of people who’d like to ride. A bridge would shorten the trip length and provide a route of quiet streets.

One Hobart family has gotten rid of their car and written about how they did it for other people to consider and at the heart of their plan is two electric cargo bikes.

While not everyone has the luxury of living close to work and services, the family was able to rely on the bikes for most of their needs but then set up a carshare agreement with another family nearby.

In getting rid of their car and utilising the share car when they need it, they believe they’ll save about $5000 a year as well as cutting their carbon footprint by using bikes more often. 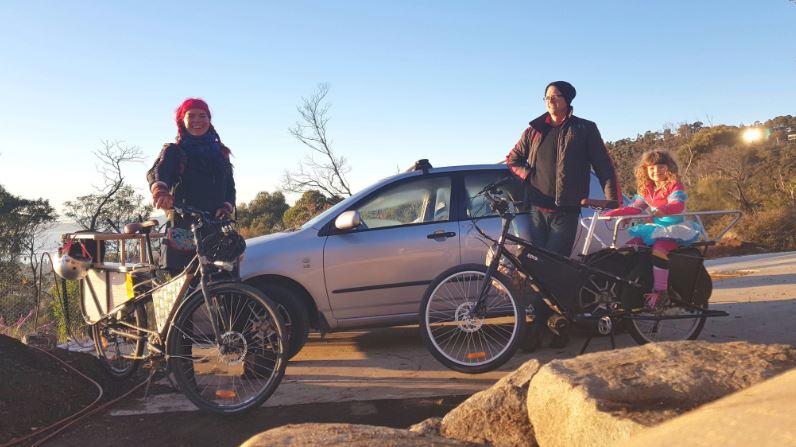 The Rotary Club of Devonport North is organising a 60 km ride and cooking event to raise money for malaria research on Sunday 13 October.

The Rotarians against Malaria ride will start at 10 am for the fast group and 11.30 am for the slower group from the car park at the Devonport Bluff, finishing there by 3 pm.

It's then on to a meal in the Aberdeen Room of the Paranaple Centre at 6 pm. Tickets for the ride are $100.

While the City of Launceston  plans how it will fill the missing link in the off-road Rocherlea to Inveresk bike corridor, it has provided a temporary on-road solution.

It has signed a route between the two off-road tracks using street bicycle signs and on-road bicycle "sharrow" markings.

While we look forward to a completely off-road path between the north and the city, this interim solution will go some way to helping people get between the two tracks.

Once the missing link is built, it will give Launcestonians a separated cycling corridor between the northern suburbs and city centre. The paths need to be widened, sealed and lit to make them commuter quality but that will be a relatively small cost once the corridor is defined. Rail trail legislation on its way

The parliament needs to change the land manager to the Dorset Council, which has had positive meetings with the federal government about renewing the funding for the trail.

The necessary legislation is already drafted as it was first introduced to the parliament in 2016 but then allowed to lapse in the face of opposition to the rail trail from some local residents and train enthusiasts.

Extension of the Rail Trail would give Tasmania it's first multi-day rail trail and the benefits that could bring to local businesses and communities.

One of our members, Kerry Forrest, is taking on the Great Cycle Challenge during October to raise money for children’s cancer research.

She’s aiming to ride 400 km and raise $2000 throughout the month and donations made by 10 October will be matched by corporate sponsors.

This is the fifth year she has taken part and over the years has ridden more than 2000 km and raised over $7500.

To follow Kerry's progress and track her rides, visit https://greatcyclechallenge.com.au/Riders/KerryForrest/m