The trusty bicycle won the day in this morning’s Ride2Work Day Commuter Challenge from Derwent Park to Mawsons Place in Hobart.

Participants on a bicycle, electric bicycle, driving a car and catching a bus all left the corner of Derwent Park and Main roads in Derwent Park at 8.18am.

The bicycle rider took the Intercity Cycleway and arrived at Mawsons Place 14 minutes later, where the Ride2Work breakfast was being held.

The electric bike rider, car driver and bus passenger all arrived within a minute of each other 22 minutes after the starting time, although the car driver was technically last as he didn’t park and walk to the finish line.

Bicycle Network Tasmania’s Public Affairs Adviser, Alison Hetherington, said the challenge was organised to illustrate the different travel options people had to get to work in the city.

“The bicycle rider took the Intercity Cycleway, which is a perfect example of the kind of separated paths we need to get more people riding.”

"The e-bike rider took the road and had to mix it with traffic and wait for lights, which slowed him down considerably.”

“Thanks to RACT and Metro Tasmania for helping out with the challenge, it’s something we’d like to run every year to gauge changes in travel times.”

The Bicycle Network Ride2Work Day breakfast was held at Mawsons Place Hobart, thanks to sponsorship from the City of Hobart and Australian Bananas.

Commuters were treated to a breakfast of croissants from Queens Pastry, pedal powered smoothies and coffees from Quickfire Kitchen and the electric bike coffee cart Aroma Roama.

Henty Designs were on hand to show off their stylish commuter bags and the Cycologist was fixing bikes throughout the morning. We also had a Henty backpack and cap on offer for anyone who registered on the Ride2Work website, and this was won by Anne Hanley in Newstead.

Thanks to Richard Atkinson for filming his trip on the e-bike along roads with no bike infrastructure which took about 22 minutes. In contrast the road bike that went along the separated Intercity Cycleway and didn't have the long waits at Macquarie and Davey streets took only 14 minutes. 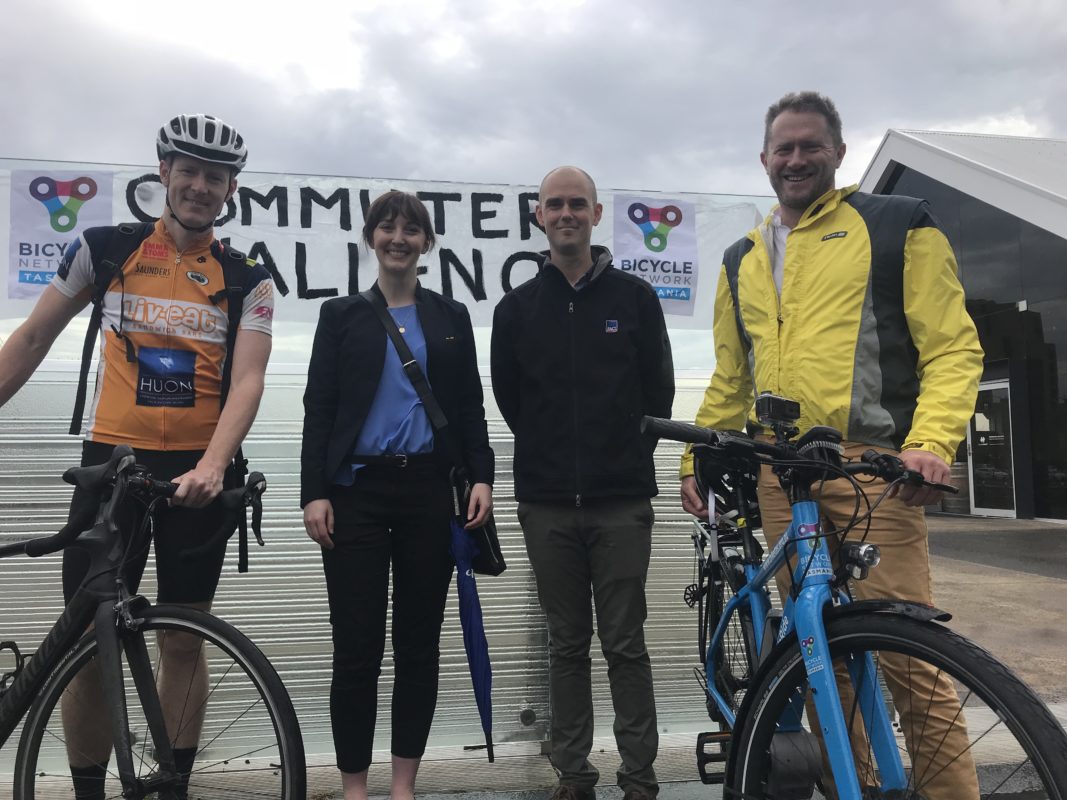