This morning marked the country’s biggest celebration of commuter riding, as Australians saddled up for National Ride2Work Day.

And what a morning it was! The threat of early showers in Melbourne did not dampen commuter spirits, and the bike gods joined in the celebrations by clearing the skies to unveil a calm morning.

Bicycle Network hosted its annual breakfast at Harbour Esplanade on Docklands where thousands of city-bound commuters dropped in for a chat, free coffee, bacon and egg rolls and plenty of Australian bananas.

“The City Of Melbourne is proud to support this event. Our vision is to become a cycling city, with a connected bicycle network and improved links to existing routes – all to make cycling more accessible for people of all ages and abilities,” said Cr Capp.

Great to have @LordMayorMelb and Cr Nicolas Frances Gilley from @cityofmelbourne joining us on a ride from Melbourne Town Hall to Docklands for National #Ride2Work Day. pic.twitter.com/k4GFLz0yda

Of course this was only one of many breakfasts being hosted at key commuter hotspots right around the country; all in the name of celebrating the benefits of riding to work and bringing together the communities that support the cause.

With two thirds of Australian’s currently not getting enough exercise and our cities being chocked with traffic, Ride2Work Day aims to promote a healthy solution to these serious problems.

Bicycle Network would like to thank all those who jumped on the bike this morning – whether you’re a daily bike commuter, a first-time rider, or you just swung by for a free coffee! You’re all helping spread the word about the benefits of riding to work and making it more accessible for people in the future. 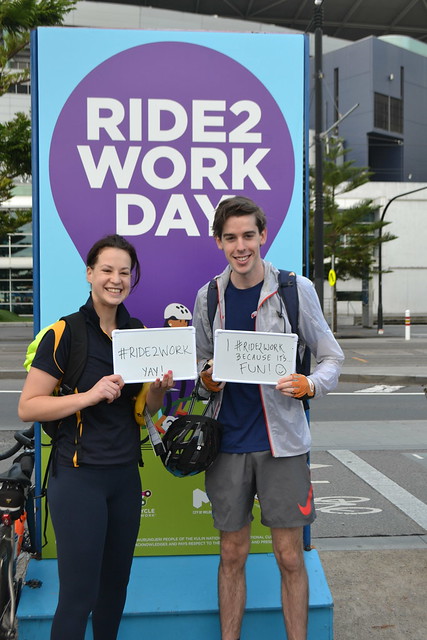 Some photos from the Melbourne breakfast are available here on Flickr.

You can also share some of your memories from the day using #Ride2Work and by tagging @Bicycle_Network.

For those who did join in this mornings celebrations, please remember to register your ride by clicking on the link below. This provides valuable data that will help us on our mission to improve bike riding culture in Australia.

You will also go into the draw to win a $1,000 Flight Centre travel voucher.

A special thanks to our...

Register below to hear when United Energy Around the Bay 2022 tickets open.

Thanks for registering your interest. Stay tuned, we'll let you know as soon as tickets are set to open in 2022.

Register below for the Women’s Community info night for United Energy Around the Bay at 5.00pm Tuesday 7 September 2021.

Register below for the e-bike and cargo bike info night at 5.00pm Thursday 9 September.

Sign up below to go into the draw to win one of 5 x $200 Coles and Myer Group gift vouchers. Plus we’ll send you the latest bike riding news as it comes. Ts and Cs apply

Thanks for joining us! The lucky winner will be drawn on Monday 1 November 2021.

Register below for the Great Outback Escape 2022 info night at 5.30pm Wednesday 18 August.

Register below to be the first to hear when Great Outback Escape 2022 bookings open.

Register below to be the first to hear when Great Top End Escape 2022 bookings open.

Want to join our next GREAT adventure?

Register interest below to be one of the first to hear when early bird opens.

Thanks for registering. Stay tuned, we'll let you know as soon as tickets open.