Bicycle Network CEO Craig Richards has given his thoughts on the upcoming Victorian state election and why it shouldn't fought out over freeways.

The battleground for this year’s state election is clear: it’s all about roads for cars.

They’ve both tapped in to the hearts and minds of traffic-weary voters and sold the dream of connected freeways.

The voters are nodding with approval as they long for a utopia where they can drive from Frankston to Geelong without a single traffic light.

Politics is a tricky profession. There are many career-defining choices to be made between promising the right thing and the popular thing.

Of course, if you don’t promise the popular thing you risk not getting elected and not having the power to do the right thing.

Making the Victorian election battleground as narrow as roads for cars seems to be an example of doing the popular thing.

The right thing to do would be to make it moving people around our state.

The problem is when it comes to moving people, our comfy, status-defining cars are the most inefficient and uneconomical mode. In the same amount of space you can move 1500 people an hour in cars, you can move 7500 on bikes, 10,000 on trams or buses and 20,000 in a train.

When it comes to overall cost, cars are the most expensive, closely followed by trains, then trams and buses.

The cheapest by a long way is the humble bicycle. It actually saves society money rather than costing money.

Data from Copenhagen, world-renowned for its approach to transport, shows that riding a bike for 1km benefits society by 26c, but driving 1km costs us 89c. 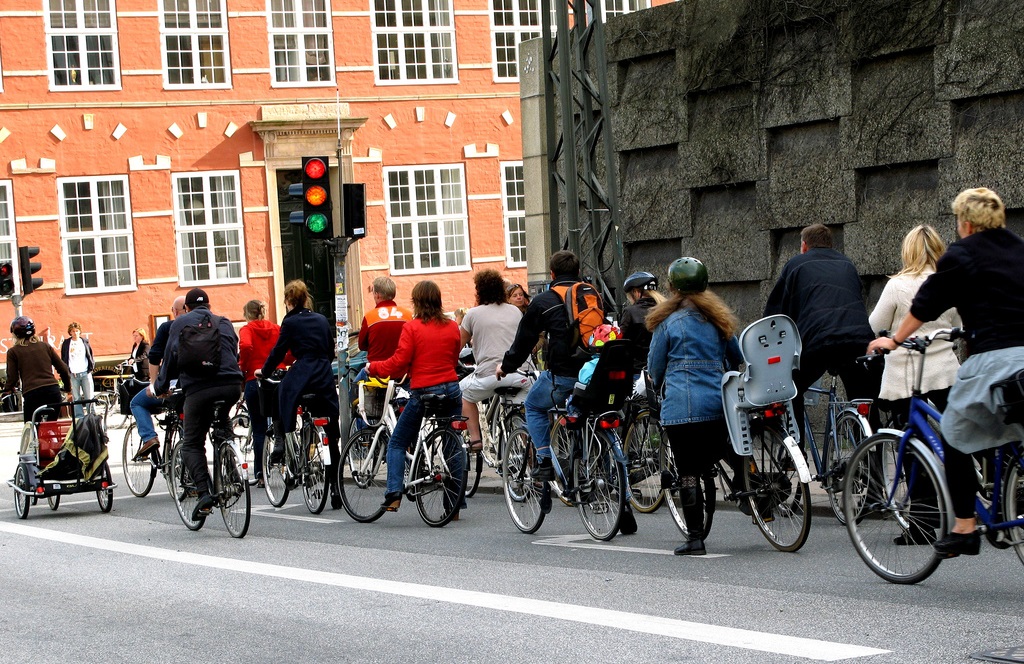 A common scene in Copenhagen where bikes are key to transport policies.

It’s disturbing that, while the economics of moving people aren’t well known to the voters, they are well known to our politicians.

They’ve all seen the failure of cities that have tried to build their way out of congestion with freeways.

They know that no matter how many more lanes you build, they quickly fill up.

They’ve heard the famous analogy that trying to fix congestion by widening roads is like trying to fix obesity by buying a bigger pair of pants.

They’ve been on study tours to the Netherlands and marvelled at the efficient multi-modal travel.

They’ve seen masses of people on bikes and know that those same people also own a train ticket and a car. They know that Dutch motorists are actually the happiest motorists on earth.

They know we’re not expecting families to pedal from Frankston to Geelong.

But our politicians choose to ignore this because they need to do the popular thing to get elected.

They don’t want to risk the potential media backlash by suggesting maybe it’s not feasible in an urban metropolis doubling in population to have more people driving door to door in their car.

The only way this is going to change is if voters send a message that we’re not sold.

That what we want is politicians with the courage to promise what we need, not just what they think most of us want.

When this happens we’ll have a politician that’s not afraid to sit on a bicycle instead of stand behind a lectern.

One who’s prepared to stand strong against the naysayers and use the evidence to show that the most efficient, economical way to get Victoria moving, is by getting Victorians moving.

This piece first appeared in the Herald Sun