A four-week study is underway to evaluate and measure driver compliance with minimum passing distance law in the ACT.

The research will examine how traffic and the built environment impacts adherence to the law which aims to protect and reduce the risk for people who ride bikes.

In the ACT, drivers are required to keep a minimum passing distance of one metre when overtaking a cyclist at under 60km/h, with 1.5 metres required if a driver is overtaking at more than 60km/h.

Victoria and the NT are the only remaining states and territories without minimum passing distance legislation in some form.

ACT Road Safety Minister Shane Rattenbury said that many drivers are conscious about passing people who ride bikes safely, but that there are still some who don’t leave enough room.

““When driving a car, we need to remember that we are in control of around 1,200 to 2,000 kilograms of metal, travelling at more than 12 metres a second when driving at 50km/h – which can kill in an instant,” Mr Rattenbury said.

“It is important that we continue to make it easier, safer and more convenient for people to choose cycling as their preferred method of transport.”

Bicycle Network is keenly awaiting the outcome of the trial which the report for this project expected to be finalised in December 2018. 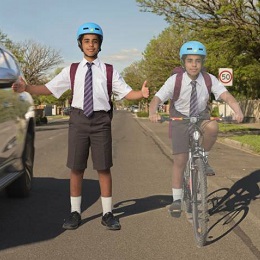 Passing campaign: give the space to ride safe New minimum passing distance laws (MPDL) came into force in Tasmania today. Bike riders must now be passed at a minimum of one metre.