Cycling infrastructure would be part of the ALP platform because of the benefits to health, productivity and community liveability, he said.

He was speaking at the launch of a campaign to establish a community cycling hub and new velodrome in Footscray.

Footscray once had a velodrome in Hansen Reserve, and the embankments are still there, although the facility closed after a damaging flood following 60 years of operation.

There is now not a single velodrome anywhere in the west of Melbourne.

The new proposal, known as Sunset Velodrome, suggests that the old Hansen Reserve facility could be resurrected.

Mr Shorten said cycling infrastructure was not expensive and could be accommodated in the budget: “It’s not a matter of if, it’s when, how and where.”

He said the proposed Sunset Velodrome facility would give children exposure to cycling, develop their skills and set them on a course for a healthy lifestyle.

Spokesman for the project, John Symons said the velodrome would include an education centre for bike skills and maintenance courses for all ages and abilities.

“The idea has evolved from being a cycling training and racing venue to having a more inclusive hub for teaching young kids and other people who are not feeling safe or confident on the roads,” he said.

“We are trying to get the message across about the problems with the lack of activity for people and the health costs.”

Tim Watts, Federal Labor Member for Gellibrand, was also at the event and said he is committed to bike riding and active transport infrastructure in Melbourne's West.

"This is a personal policy passion of mine and one that we will be doing further policy development on in the lead up to the next Federal election" said Mr Watts on his Facebook page.

The project is backed by Footscray Cycling Club, Footscray City College, the Seddon Community Bank and other groups.

Keep up with the Western Community Cycling Hub on their Facebook page. 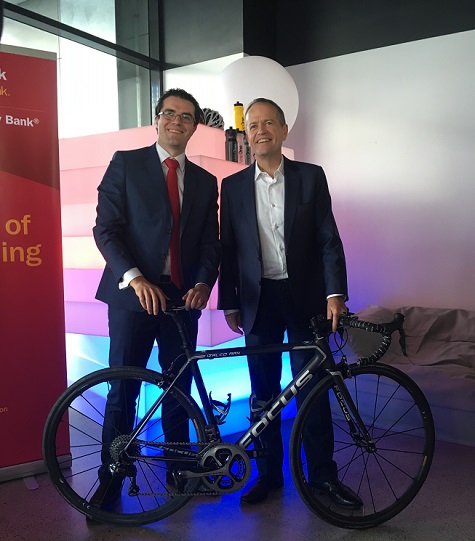